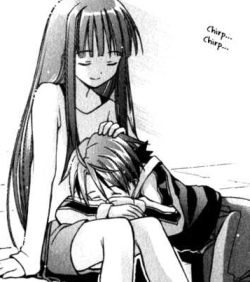 Hamlet: Lady, shall I lie in your lap?
Ophelia: No, my lord.
Hamlet: I mean, my head upon your lap?
— Hamlet
Advertisement:

A good way to show the physical intimacy and trust which a couple have is to rest one's head on the other's lap. Usually, the man does the resting while the woman provides the lap, not only because of anatomical reasons but because the lap-owner is typically of a nurturing nature more associated with femininity. Bonus points if she's stroking his hair.

In some cases this is done between people who are not necessarily lovers, to comfort someone who is weeping or injured.

In Japan, if they're really close, the sitter is cleaning out the layer's ears with a pick. This is something old married couples do.

Compare Holding Hands and Sleep Cute. Tummy Cushion is a variation where a much smaller character sleeps on top of a much larger one.

Tohru's lap proves to be far more comfortable than a bed or couch.

Tohru's lap proves to be far more comfortable than a bed or couch.