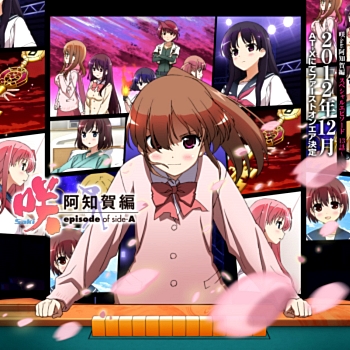 The OTHER side of the National Tournament bracket.
Advertisement:

Ten years ago, the otherwise lowly mahjong team of Achiga Girls' Academy upset the balance of power in Nara Prefecture when it defeated the powerhouse team from Bansei High School. It eventually advanced into the Nationals, but unfortunately lost in the semifinals to the eventual champion, with one of them, ace player Harue Akado, being devastated into an early retirement, and eventually disbanded next year after a disastrous performance at the regionals alone.

Six years after that fateful match, fourth-graders Shizuno Takakamo and Ako Atarashi, as well as fifth-grader Kuro Matsumi — themselves players under the tutelage of Harue, now adviser for the local children's club — befriend transferee Nodoka Haramura, who eventually moved away back in their seventh-grade at Achiga Junior High School, a year after Harue also left for a corporate league. Two years later, Shizuno sees Nodoka on television playing her way to become Inter-Middle High champion, inspiring her to reassemble her friends and help revive Achiga's high-school mahjong team.

And come their first year in high school, Shizuno, Ako and Kuro, now joined by Kuro's older sister Yuu and Harue fangirl Arata Sagimori, as well as coached once again by Harue, lead Team Achiga to its first competitive season in nine years, with the former three intent on playing once again with Nodoka... even if it means going through some of Japan's most fearsome players, as well as Nodoka's teammate from Kiyosumi High School — a certain upstart freshman by the name of Saki Miyanaga.

Saki Achiga-hen -episode of Side A- (咲 -Saki- 阿知賀編 -episode of Side-A-) is a spinoff of Saki, running from 2011 to 2013, written by Ritz Kobayashi and illustrated by Aguri Igarashi (of Bamboo Blade fame), which takes place concurrently with the main series.

The manga received an anime adaptation that aired as part of the Spring 2012 Anime season. The first of the extra episodes, featuring the rest of Team Achiga's struggles against reigning champion Team Shiraitodai from West Tokyo (led by Saki's estranged older sister Teru), was released in December 2012, incidentally coinciding with the announcement of a sequel for the main series. The last one was released in May 2013, making a total of four extra episodes.

For tropes related to the characters introduced in the series, please refer to the main franchise character sheet.