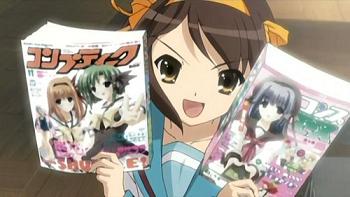 So that's where she gets her strange ideas...
One aspect of Bishoujo Series, and the cause of many tropes such as the Unwanted Harem and an Improbably Female Cast, is that you really shouldn't have too many important male characters. However, the assumed male demographic supposedly has trouble relating to female characters.
Advertisement:

So instead, why not have a girl who likes the things that they do? You may not want to use a crossdressing girl or even a tomboy — just give her a Fan Boy personality.

A lot of this depends on what the current stereotype of a fan is and finding a fandom that is noticeably gender-skewed (Moe and Humongous Mecha are popular targets) but the cast will still have only one character who is a fan of something stereotypically coded male, and especially for obscure older things the adult audience immediately recognizes.

Another bonus to this is that the character's "masculine" characteristics are technically arbitrary, and easily tweaked to specific situations. Fans are very willing to put up with a lot of old tropes they wouldn't normally tolerate if the character was actually male.

Contrast Cosplay Otaku Girl and Fangirl. Often overlaps with Gamer Chick and is sometimes part of the Estrogen Brigade.