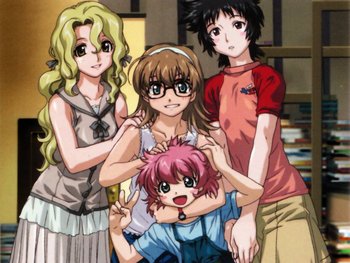 Left to right: Michelle ("pretty"), Maggie ("mannish"), Anita ("childish"), Nenene ("Team Mom").
"Together, it was as if we formed one single, complete person.
Wild, unstoppable Bridget.
Shy and beautiful Lena.
Tibby, the rebel.
And me, Carmen, the writer."
— The Sisterhood of the Traveling Pants
Advertisement:

Related to both The Three Faces of Eve and Four-Temperament Ensemble. Unrelated, however, to Four Is Death. Usually.

This particular ensemble typically consists of:

The admirable character might be The Smart Gal or the Cool Big Sis or the Team Mom. Otherwise, the mother figure will be doubled up with either the sweet-naive girl, the sexy girl or even the mannish one.

This ensemble can typically be found in Schoolgirl Series. Compare Town Girls. See also Beauty, Brains, and Brawn. For the Spear Counterpart to this group, see Four-Man Band.

The four English wives of Henry VIII are a downplayed version of this trope, at least in how they’re remembered; Anne Boleyn wasn’t a tomboy, but she was quite fiery and outspoken, Jane Seymour was the shy and submissive “good girl”, whom Henry was buried next to, Katherine Howard was beheaded for her promiscuity, and the maternal Catherine Parr was known for her literacy and education, as well as her influence on the future Queen Elizabeth I.