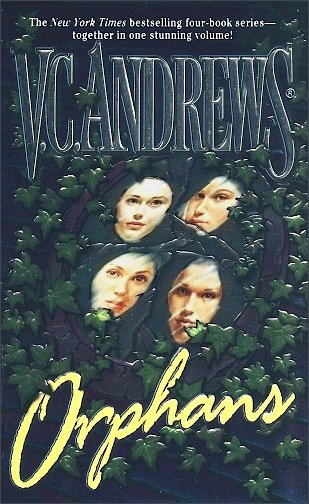 Four girls caught in the shadows of the past.... (Cover of the US omnibus edition containing the first four books, by Jim Lebbad and Lisa Falkenstern)
Advertisement:

A series of novels published under the name of V. C. Andrews, but written entirely by the ghostwriter who had previously written sequels to several of Andrews's novels.

The plot revolves around four young girls who meet in an Orphanage of Fear. The first four novellas introduce each title character—Butterfly, a wistful would-be ballerina who longs for a loving family; Crystal, a budding, brilliant scientist whose new adoptive mother has a fragile grasp on reality; Brooke, a tomboy smothered by her new family's expectations and torn by the abandonment of her birth mother; and Raven, removed from an abusive and negligent mother only to find herself living with her even more dangerous relatives—and details how her life's tragedies ended with coming to the orphanage, while a final full-length novel, Runaways, recounts the girls' adventures together when they escape the orphanage.

This unusual format of four short novellas culminating in a full-length adventure established a pattern that would endure for two more series (Wildflowers and Shooting Stars) and would mark the transition between the traditional five-novel Andrews sagas and future shorter series.