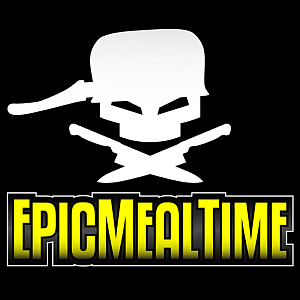 "We make your dreams come true, and then we eat them."
"This is Epic Meal Time: the only cooking show with no rules, no controls, no boundaries, no borders. And it's on every motherf*caw*ing Tuesday. It's been on every motherf*caw*ing Tuesday for the last five years, and it's gonna be on for the next five years. I promise you that. Where we go from here is a choice I leave to you."
—Harley Morenstein, host, in The "Last Episode" of Epic Meal Time.
Advertisement:

So a Montreal high school substitute teacher and his friends decided one day to put a ton of fast food items onto a pizza shell, cover that in cheese and cook it. Then, surprisingly, it got hits. Now, they've turned their gluttony into a weekly series devoted to the most high-calorie and fattening dishes imaginable: Epic Meal Time. The show started in October 2010 and is still ongoing, with new episodes every Tuesday.

With the audacity to call themselves an "online cooking show", the first efforts soon expanded into meat sculptures, questionable uses of bacon, "meat glue", bacon and five birds in a pig - and bacon.

is also live. They have made an appearance on Jay Leno, where they made a shepherd's pie that was also a car.

Epic Chef, a Cooking Duel between two contestants who have their meals judged by Harley and two guest judges, premiered in December 2012. New episodes are posted every Friday in addition to the regular Epic Meal Time episodes every Tuesday.

In addition to the above, Epic Meal Time's "online cooking show" status is now validated every Saturday with Handle It, an instructional video series using the Epic Meal Time Sellout Kitchen Arsenal. Here, the Epic Meal Time crew teaches you the tricks of their trade with all of the classic character antics of the normal show.

Next time, we eat Wikipedia!
Feedback

Harley Morenstein is the Doctor of Dressing, the Pharaoh of Flavor, the Minister of Mixture, the Connoisseur of Condiments, the Don of the Dripping, the Jeff Goldblum of the Internet, and his personal favorite... the Sauce Boss.

Example of:
I Have Many Names

Harley Morenstein is the Doctor of Dressing, the Pharaoh of Flavor, the Minister of Mixture, the Connoisseur of Condiments, the Don of the Dripping, the Jeff Goldblum of the Internet, and his personal favorite... the Sauce Boss.