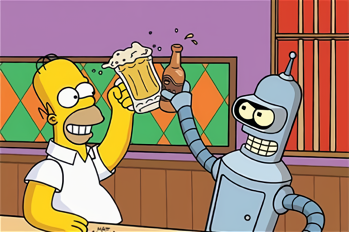 Drinking brings the most awesome of characters together. (And then it actually happened.)
The TARDIS has materialized everywhere from the Planet of the Apes to Fawlty Towers, even onto the set of Wheel of Fortune.
— Henry Jenkins, Textual Poachers: Television Fans and Participatory Culture (Chapter 5: "Scribbling in the Margins: Fan Readers/Fan Writers")

Alternatively, a single popular character can cross over from one show into an other for a brief guest appearance; this has the effect of attracting that character's fans from the other show without requiring the writing teams to sync up or creating DVD- and arc-unfriendly episodes. This is very common in comic books, in which most characters are part of a larger universe, such as the Marvel Universe or The DCU. It happens less often in TV and movie properties based on comic books, since they are often made by different production companies.

Batman vs. The Teenage Mutant

Batman vs. The Teenage Mutant