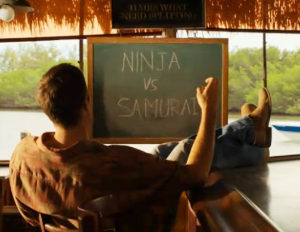 Pirates win, obviously.
"I don't care if The Hulk could defeat the Man of Steel
I'm gonna rearrange your face if you continue to debate
Whether Logan's claws could pierce Steve Rogers' shield!"
— Ookla the Mok, "Stop Talking About Comic Books or I'll Kill You"
Advertisement:

One way to show just how nerdy some characters are is to have them idly debating who would win in a hypothetical fight between two fictional characters. The debate can be made even more pointless and absurd if the characters are non-violent or not even owned by the same company.

It can also be a debate about things other than characters, such as Enterprise vs. Star Destroyer, Pirates vs. Ninjas, etc. The key element is pretty much discussing Cool vs. Awesome. Sometimes, instead of a physical fight, they're more concerned with who would win in a rap battle.

A Sub-Trope to Seinfeldian Conversation (most of time, because in some cases the hypothetical case can involve characters that really exist within the work's universe).

Compare Ultimate Showdown of Ultimate Destiny, which is when it actually happens instead of being conversed. Not to be confused with a "Cavemen vs. Astronauts" Debate, which, while there may be overlap, is about a debate/discussion that gets out of hand.

Alternative Title(s): Who Would Win