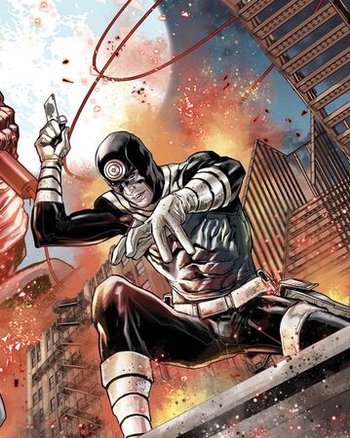 You're good Daredevil, I'll grant you that! But I'm better and I'll prove it!

Similarly to the distinguished competition's Joker, Bullseye's true origin isn't known, and his multiple-choice past is part of the character's appeal. In the past, he's answered to the names Lester, Leonard, and Benjamin Poindexter, but none of them have ever truly been established as his real one. Instead, he's defined by his trademark skill: the ability to use anything as a projectile weapon.

He's also well-known as one of Daredevil's most frequent rogues, often antagonizing the Man Without Fear, and he infamously killed both Elektra and Karen Page — two of Daredevil's most prominent love interests. After the Skrull invasion of Earth, he even (briefly) became the "new" Hawkeye, as part of Norman Osborn's Dark Avengers.

As one of Marvel's most popular villains, Bullseye has appeared frequently in other media. He was portrayed by Colin Farrell in the 2003 Daredevil movie, and Wilson Bethel plays him in the third season of Netflix's Daredevil.