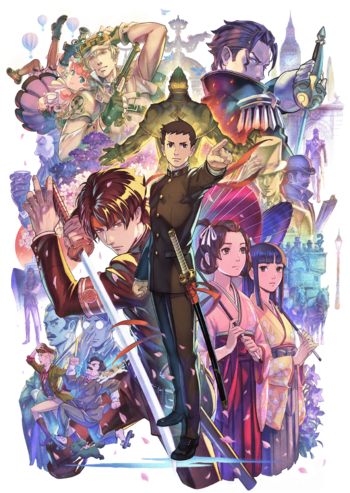 A new age of law begins.
"I will become a lawyer. I have to."
— Ryunosuke Naruhodo, "The Adventure of the Unbreakable Speckled Band"
Advertisement:

A prequel/Spin-Off duology of the Ace Attorney series of games, The Great Ace Attorney stars the Meiji-era defense attorney Ryunosuke Naruhodo, ancestor of Phoenix Wright. The main director and writer is series creator Shu Takumi instead of Takeshi Yamazaki, whose team was working on another Ace Attorney title at the same time.

It is the Meiji Restoration period of Japanese history (specifically, the beginning of the twentieth century AD); a time of great cultural shift towards a growing trend of westernization in Japanese lifestyle and architecture. Among those taking advantage of the new opportunities the era affords is one Ryunosuke Naruhodo, a second-year student at the Imperial Yumei University. Things suddenly change for the young man when he is accused of murdering a man in a restaurant. Forced to stand trial in the newly established court systems of the period, Ryunosuke begins a long journey of justice that will take him well beyond the shores of Japan and into the heart of one of Japan's foreign allies, The British Empire.

The first game, Dai Gyakuten Saiban: Naruhodou Ryuunosuke no Boukennote Translated as "The Great Turnabout Trial: The Adventure of Ryunosuke Naruhodo" game was originally released on July 9, 2015 for the Nintendo 3DS. The sequel, Dai Gyakuten Saiban 2: Naruhodou Ryuunosuke no Kakugonote Translated as "The Great Turnabout Trial 2: The Resolve of Ryunosuke Naruhodo" was released on August 3rd, 2017. Following this both games have been released on mobile platforms with the first game in 2017, and the sequel in 2018. During all this time, the games were exclusive to Japan with no sign of a localized release, so the fangroup Scarlet Study worked on a Fan Translation for the Nintendo 3DS and Android versions of the games

, released on PlayStation 4, Nintendo Switch and PC via Steam on 27th July, 2021. The games were also dubbed in English.