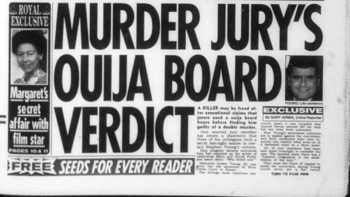 "I'm being judged by 12 people too dumb to get out of jury duty!"
— Old joke
Advertisement:

A jury defies all logic and common sense and comes back with a verdict contrary to the evidence. It's not a Joker Jury, a Jury of the Damned, or a Kangaroo Court — a group of regular citizens has come back with the wrong decision.

Usually, a not guilty verdict is intended to demonstrate the jury's outright gullibility (or intimidation), whereas an unfair guilty verdict indicates they were unable to see past some fear or prejudice against the defendant.

In real life (principally in the USA), the "voir dire" process is meant to ensure that juries are made up of fair and impartial members who will treat the case seriously. In the UK and Commonwealth, it can include testing the competency of potential jurors. However, in most US jurisdictions, lawyers are allowed to weed out potential jurors for any reason at all (other than race), granting plenty of latitude for less ethical lawyers who prefer juries that are easily swayed by emotional appeals and courtroom theatrics.

Occasionally, a surprise acquittal can be due to a phenomenon known as "jury nullification", in which the jurors return a "not guilty" verdict even though the prosecution has in fact proven their case beyond a reasonable doubt. This is usually because the jury feels that extenuating circumstances justify the crime, or occasionally because they feel the law is unfairly applied or simply wrong. There are two sides to this: A) the US legal system says that it is not the jury's place to decide what the law should be, but to come to a conclusion as to whether the law as it is currently written has or has not been broken. B) Nevertheless, jury nullification is legal in the US. A criminal court can't insist on a guilty verdict, an acquittal can't be appealed, and jurors can't be punished for a verdict. note There are circumstances where a judge can set aside an acquittal, but it's extremely rare and limited to cases of juror misconduct; the result is a mistrial, not a guilty verdict, which means the defendant has to be tried again, or the case is dropped.