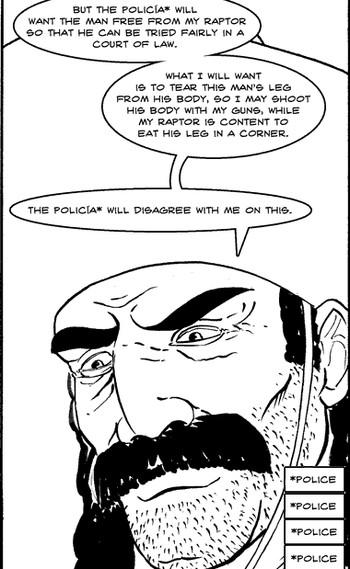 So that's what "policia" means...
"Wait a second — you're not translating anything I say to him — which means you totally understand me, dude!"
— Hurley, Lost
Advertisement:

The heroes are talking to someone, like a Ruthless Foreign Gangster or the head of a foreign Mega-Corp, and they have to go through a translator to do so. After a few back and forths, the foreigner will answer the heroes directly in the language of the work fluently, meaning they like to keep around a Completely Unnecessary Translator. Story-wise, this is good to show that they are obviously foreign, what with the Russian/Chinese they were using, and that they are intelligent (dumb characters never pull this off beyond one or two lines in English). Behind the scenes, it's expensive and takes up too much screen time and effort to be plausible for very long.

Common with characters who Majored in Western Hypocrisy. Subverts Tactful Translation, as it turns out at least one person in the conversation knew exactly what the other really said the entire time. See also Elective Unintelligible. If the translator is in on it too or wants to have some fun of their own, they may become a Trolling Translator. See also Language Fluency Denial.