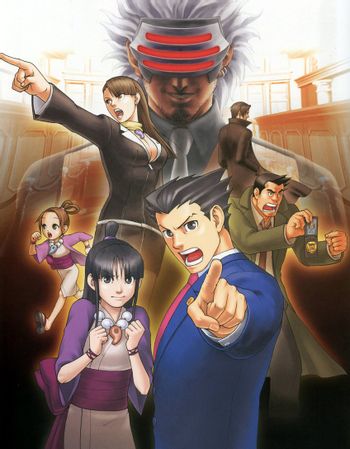 From the past to the present, the truth will finally be brought to light...
"It's only natural for living creatures to fight to protect their own lives. But what makes us human is that we fight for others. But who do you fight for? How hard must you fight...? That's the true measure of what human life is worth. We defense attorneys are warriors who are constantly challenged by that question. Even when the battle is over, and the bonds that connect us are severed... We always return... Time and time again. "
— Phoenix Wright, "Bridge to the Turnabout"
Advertisement:

Like its two predecessors, the game follows Phoenix Wright, a kind and intelligent yet hapless defense attorney who works to save innocent clients from guilty verdicts. By his side are his loyal assistant, Maya Fey, her older sister Mia, and her cousin Pearl. On the opposite side of the courtroom this time is the mysterious coffee-guzzling prosecutor Godot, who bears a grudge against Phoenix for unknown reasons. Meanwhile, the enigmatic beauty Dahlia Hawthorne seems to recur in the pasts of Phoenix, Edgeworth, and the Feys. The fate of the Fey family hangs in the balance as the last aftershocks of the DL-6 case finally play out.

Initially the Grand Finale of Phoenix's arc, the game was chronologically followed by Apollo Justice: Ace Attorney, which stars a new cast but with Phoenix in a surprising mentor role.

The Phoenix trilogy as a whole has been compiled and updated for rerelease (including HD art and smoother animations) for multiple systemsnote  iOS and Android, Nintendo 3DS, Nintendo Switch, Playstation 4, Xbox One, and PC as the Phoenix Wright: Ace Attorney Trilogy.

Trials and Tribulations was adapted as the second season of the franchise's anime adaptation in 2018.