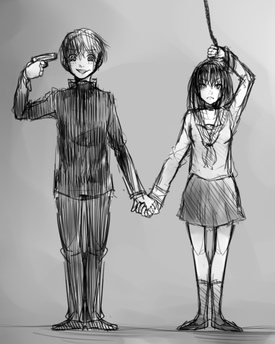 "A murder suicide is all about trust."
— The X-Files, "How the Ghosts Stole Christmas."
Advertisement:

Suicide pacts are when two or more people all decide to kill themselves at the same time, based upon a pre-determined plan that determines how, where, and when. They're different from mass suicides (such as when 960 Jews killed themselves rather than submit to being captured by the Romans at Masada back in 73 AD) because generally only a handful of people are involved; similarly, they differ from cult suicides because there's no dogmatic reason for the suicide itselfnote Epically given that the surviving members of Jonestown, considered the deaths not a mass suicide but mass murder. Suicide pacts, rather, usually involve small groups of people (such as married or romantic partners, family members, or friends) whose motivations are intensely personal and individual.

At least one episode of every forensic investigation drama series ever has revolves around the plot of a suicide pact gone wrong.

Compare Driven to Suicide. This is sadly Truth in Television.