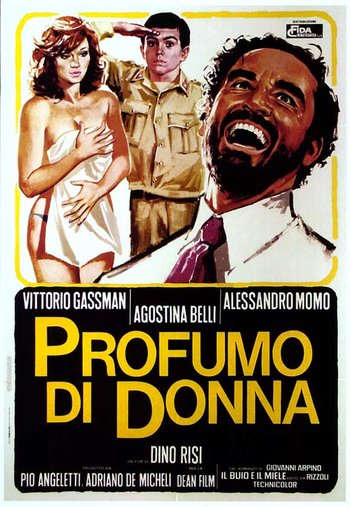 Profumo di donna (Scent of a Woman) is a 1974 film from Italy directed by Dino Risi.

Giovanni is a soldier in the army who looks to be in his late teens (the actor was 17). Giovanni, who is off on leave, is given a temp job as caretaker to a retired army campaign, Fausto Consolo. Fausto (Vittorio Gassman) is retired because an accident with a bomb during a training exercise left him blind and without his left hand and forearm.

Giovanni is spending a week as caretaker to Fausto as they journey from Turin to Milan, where Fausto is going to visit Vincenzo, an army lieutenant who was also blinded in the same bomb accident. Fausto turns out to not be Inspirationally Disadvantaged at all. He is in fact loud, and obnoxious, and extremely horny. Fausto enlists Giovanni into finding him sexy hookers, while insisting that he can recognize a beautiful woman by her smell, hence the title. The two have a series of madcap adventures on the way from Turin to Milan, as Giovanni learns a lot more about his irascible companion.

In 1992 Profumo di donna received a Foreign Remake as Scent of a Woman, with Al Pacino playing the blind army officer. Alessandro Momo, who played Giovanni, died in a motorcycle accident just a few weeks after this film was completed, a week before his 18th birthday.