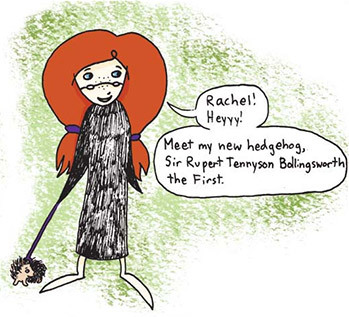 How do you show that your pet is special? When you want to go above and beyond a normal pet name, a formal title is the easiest way to add some sophistication. He's not just Fluffernutter, he's Mister Fluffernutter! You can usually expect such a pet to be a little lap dog or a pampered kitty. However, they may occasionally be horrible giant scary monsters, so beware.

Often overlaps with Mister Muffykins. The Right-Hand Cat is often a Formally-Named Pet. Likewise in pet-related cases of Consulting Mister Puppet. Depending on the honorific chosen, this can aid in/lead to Your Tomcat Is Pregnant. How NOT to Write a Novel mentions this as something that is overdone.