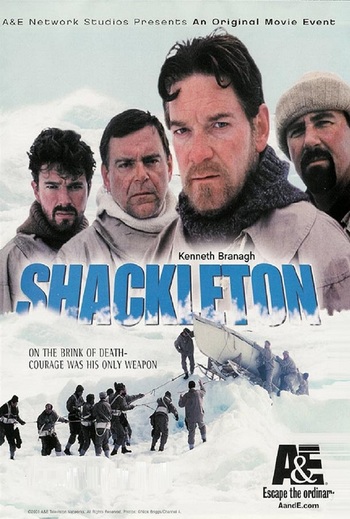 Shackleton is a 2002 TV movie written and directed by Charles Sturridge.

It's 3 1/2 hours long and was originally aired on television in two parts. It tells the true story of the epic Imperial Trans-Antarctic Expedition

of 1914. Ernest Shackleton (Kenneth Branagh) is a veteran of Antarctic exploration who failed in his last attempt to reach the South Pole, turning back because he and his men faced death by starvation if they didn't. Unfortunately for Shackleton, in the meantime two different explorers, Roald Amundsen and Robert Scott, reached the Pole—and Scott and his men died on the way back, instantly becoming martyrs.

Faced with eclipse and needing something to restore his fortunes, Shackleton hits on something that neither Amundsen nor Scott even attempted: march all the way across Antarctica, on foot. Desperate scrounging for funds finally gets him a ship and men, and he's off in August of 1914. (World War I is breaking out at this same time but Shackleton gets the thumbs-up from Winston Churchill and the Admiralty.)

Shackleton and his men take their ship, the Endurance, into the icy waters of Antarctica's Weddell Sea. There, disaster strikes. The ship gets stuck in the ice and, after several months, is eventually crushed by the pressure of the ice pack. Shackleton's men survive that just fine, but are stranded, left adrift on the ice pack. They are stuck in the coldest place on earth, hundreds of miles from any source of help or rescue.