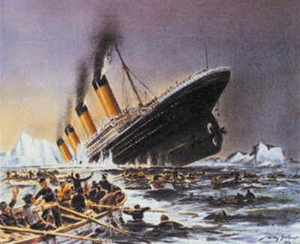 Essentially, you have a ship of some sort, be it an oceangoing vessel or a Cool Starship. At some point, the ship suffers some catastrophe that makes it a very good idea not to remain there, because it is about to explode, fall to the planet below, go careening uncontrollably into the nearest star, or, you know, sink. What are the passengers and crew to do? Why, they must Abandon Ship! Bonus points if the trope's actual name, which is a Stock Phrase nearly omnipresent in all movies dealing with naval action, wet or otherwise, is used.

If much of the story has taken place on the ship, then her death (and it will often be played as a death rather than a destruction, complete with strangely mournful sounding metallic groans and dramatic music) will be rather dramatic and played out. If our hero gets to the lifeboat only to realize that a friend or loved one has not similarly done so for some reason, a miniature quest may ensue as they make their way through the chaotic process of the ship breaking up and sinking. Some reference might be made to the Captain Going Down with the Ship.

On a military airplane, the crew might be expected to make use of Ejection Seats to escape the plane. Otherwise, they'll probably have to get out the old fashioned way: Strapping on a parachute and getting to an exit before the plane crashes. Starships typically have Escape Pods for the same purpose.

Not to Be Confused with Abandon Shipping, which occurs when a Shipping community suddenly abandons a given pairing (and was formerly known as Abandon Ship).

"Every man for himself!"

With the "Titanic"'s sinking accelerating faster and faster, Captain Smith orders via loudspeaker that every crew member and passenger abandon ship any way possible, with any semblance of order going with it.

"Every man for himself!"

With the "Titanic"'s sinking accelerating faster and faster, Captain Smith orders via loudspeaker that every crew member and passenger abandon ship any way possible, with any semblance of order going with it.