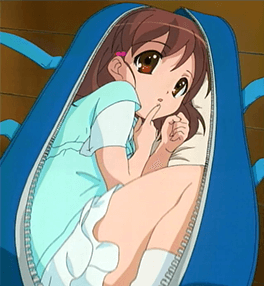 Be sure to store your little sister in the overhead compartment before takeoff.
[Annie has smuggled Molly onto the ship which she and Daddy Warbucks are leaving for England on]
Miss Hannigan: [running onto the dock as the ship departs] Stowaway! Stowaway!
Warbucks: Isn't that Miss Hannigan?
Annie: Why yes, it is. She's coming to see us off.
Miss Hannigan: Stop that ship! Stowaway!
Warbucks: What's that she's saying?
Annie: I think she's saying... [thinks] ..."Stay awhile! Stay awhile!"
— Annie: A Royal Adventure!
Advertisement:

In fiction, children have a habit of hiding on ships, airplanes, spaceships, etc., whenever they decide to go on an adventure.

When they are discovered, the adults are frequently unable to leave them behind, usually because of sympathy and/or because it would be too expensive, difficult, or time-consuming to return them.