Western Animation / The Secret of the Magic Potion 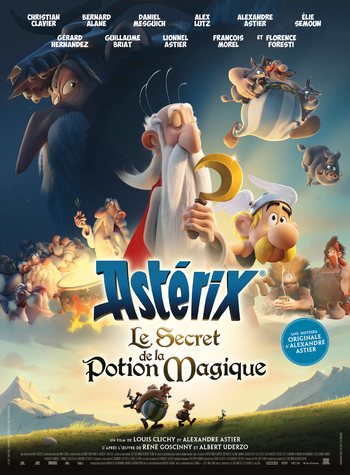 Asterix: The Secret of the Magic Potion (Astérix: Le Secret de la Potion Magique) is a 2018 French animated film based on the Asterix comic books. Like The Mansions of the Gods, it was directed by Alexandre Astier and Louis Clichy, and is made in CGI. Therefore, this film can be viewed as a sequel to it. However, the plots are unrelated and nothing tells you whether things happen before or after the plot in The Mansions of the Gods. The film also marks the first time that Asterix is not voiced by Roger Carel, who did it since 1967.

Unlike the previous film (adapted from a specific Asterix book), this one tells an original story. After an unfortunate fall from a tree, Getafix breaks his foot. Feeling that he's getting too old, and that he can't risk disappearing without transmitting the secret of the Magic Potion first, he starts the search for a young druid who can become his successor.

Asterix: The Secret of the Magic Potion provides examples of: