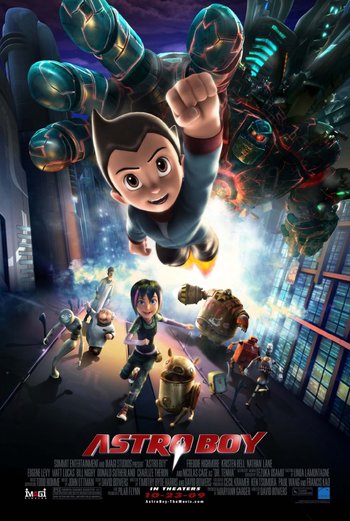 Have a blast!
Advertisement:

Astro Boy is a CGI movie produced by Imagi Animation Studios and distributed by Summit Entertainment in October 2009, based on the manga Astro Boy.

In the future, there exists a city in the sky, hovering over the garbage-ridden surface of the Earth. Metro City is a utopia in which robots have been created to take over many of the tasks once done by humans, from simple shopping trips to the dirty work that no one wants to do. Their creator is none other than the brilliant Doctor Tenma (Nicolas Cage), the head of the Ministry of Science.

As it just so happens, Tenma’s son, Toby (Freddie Highmore), has inherited his extraordinary intelligence, and is absolutely fascinated by robots and the science behind them. After breezing through a pop quiz at school and receiving permission to leave early as a result, Toby learns from a brief chat with his father’s hologram that he won’t be able to take him to the Symposium, because it turns out he’s needed at the unveiling of the Peacekeeper, a new military robot to be shown to President Stone (Donald Sutherland) later that day. Naturally, despite being ordered to go home, Toby hacks into the robot in charge of driving the car and immediately goes along to see it with him.

From there, things take a turn for the worse. There are two newly discovered cores capable of powering a robot; a blue, positive one, and the extremely unstable red one that resulted as a side effect from the creation of the first. While initially the blue one had been intended for the robot, President Stone, despite having little to no knowledge in the field, decides to use the red one instead. Disaster breaks loose as the robot goes berserk, and in an effort to seal it in behind a glass wall, Toby gets trapped inside with it. When the robot attempts to break free, he is caught in the explosion and completely vaporized.

The experience shatters Tenma, who soon gets to work building a robotic replacement powered by the blue core, giving it all the memories of his deceased son in an effort to return things to normal. In the beginning, it seems as though the robot is a perfect copy, but Tenma starts noticing differences, and rejects him. (There's an implication that the robot isn't as different from Toby as Tenma thinks, but rather he's seeing a side of his son he never saw before, because he's giving the replacement the attention he was always too busy to give the original.) As if the sudden rejection by his father weren’t enough, it isn’t long before President Stone finds out that Astro is in possession of the blue core, and resolves to hunt him down and retrieve it for use in the Peacekeeper. Astro finds himself alone in a search for his destiny, the place in the world where he belongs. At the same time, the president is hot on his tracks for the core that powers him, and will stop at nothing to get re-elected by the public.

The 2009 film provides examples of, in addition to tropes inherited from the manga: