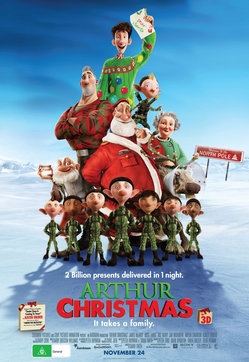 Arthur Christmas is a 2011 CGI animated film produced by Aardman Animations. It is their second attempt at CGI and their first film produced in their partnership with Sony Pictures Animation.

The film is set on Christmas Eve, and at last reveals the answer to every child's question: "So how does Santa Claus deliver all those presents in one night?" It's thanks to Santa's ultra-high-tech operation hidden beneath the North Pole, a veritable army of elves, and a cloaked "sleigh" the size of a small city. It also turns out that being Santa Claus is an inheritable position, passed from father to son. Except this time, there are two sons who are prospective Santas: Arthur, whose heart is in the right place but is a bumbler, and his brother Steve, who is extremely efficient but more serious. Their father Malcolm, the current Santa, is little more than a figurehead who isn't familiar with how anything in his company works. When one out of the 2 billion presents is accidentally not delivered, it's up to Arthur to complete the mission - with a little help from his grandfather (the previous Santa Claus) and a plucky female elf named Bryony - before Christmas morning dawns and a child's heart breaks. This must be done, of course, without being discovered by the rest of the world. Naturally, this turns out to be much harder than it sounds.

Not to be confused with Arthur's Perfect Christmas, a 2000 Christmas Special with a talking bipedal aardvark.