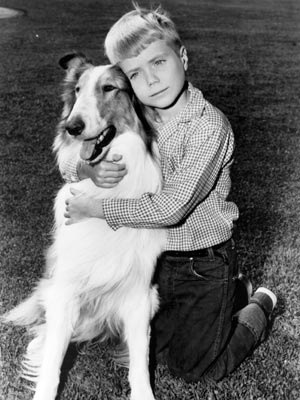 Our heroine and her boy, Timmy.
"The way Lassie had to constantly save the family, you have to believe they were dumber than dirt. The only way their farm could have survived is from government grants, which you can figure Lassie filled out the paperwork."
—Dave Barry
Advertisement:

Lassie is a long-running children's adventure series, originally airing on CBS from 1954–71 and in First-Run Syndication from 1971–73, that featured the exploits of heroic collie dog Lassie. One of the archetypal Heroic Pet Story series, it has inspired many later imitations and parodies.

The series initially depicted Lassie as the pet of farm boy Jeff Miller (Tommy Rettig), and in later seasons Timmy Martin (Jon Provost), of "What's that, Lassie? Timmy's fallen down a well?" fame — although a well was actually one of the few things Timmy didn't fall down in the course of the series.

It may be a little hard for modern tropers to really grok, but this series was a big deal back in the day. It was on the air at the very dawn of mass-consumption television, and it hit exactly the perfect note for young baby-boom families of the time. Alongside such shows as Leave It to Beaver, Lassie was one of the first family series to demonstrate just how potent television was as a medium — not just for storytelling, but for making obscene amounts of money.

As the show ran for 19 seasons, six different dogs portrayed Lassie over the course of its run; all were owned and trained by professional trainer Rudd Weatherwax, and each of the five successors were descended from the original, whose off-screen name was Pal. Pal was the original Lassie, who had starred in the 1943 film Lassie Come Home (based on a novel by Eric Knight) and six sequels; when the film series ended, Weatherwax acquired the Lassie trademark (in lieu of unpaid wages, according to one account), and the television series resulted. Incidentally, all six dogs were actually male; male collies were thought to be more visually impressive and less subject to seasonal shedding issues.