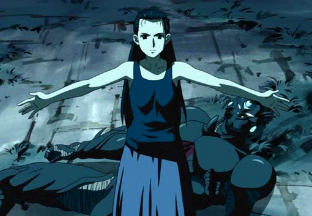 The compassionate soul may provide a stronger shield than steel or stone.
Buffy: If you want Tara, you'll have to go through all of us.
Spike: Except me.
Xander: Except Spike.
Spike: I don't care what happens.
— Buffy the Vampire Slayer, "Family"
Advertisement:

Sometimes a character (call her Alice) has something that needs protecting, and she doesn't have anything to protect it with but herself. So that's what she uses. She plants herself firmly between the threat and the target with arms protectively spread wide or defiantly clenched to her sides. If the villain(s) want to pass, they will have to go through Alice. (Actually saying something to this effect is optional.)

When this is done by a badass, you have I Am Your Opponent. This act may cause the enemy to reconsider the wisdom of the current course of action, lead to an epic showdown as they proceed to back up their challenge... or be a set-up for The Worf Effect as the villain proceeds to plow through the badass without breaking stride.

Another form is when Alice really has no way of stopping the enemy aside from being in the way. She may be braced to fight as best she can, even if that means sacrificing her own life. Perhaps she is hoping her display of Friendship or Love will faze the aggressor into reconsidering. She may be armed with nothing but her own defiance and protecting the other with sheer force of will. In other cases, Alice is important to the attacker for some reason — this makes the Mad Scientist's Beautiful Daughter and Living MacGuffin common participants in this trope. She may even just be stalling for time so The Cavalry will arrive.

Alice being in the way usually makes the attacker stop and consider their next course of action for at least a moment. If they don't care what happens to Alice, they may happily go through her anyway.

Occasionally, a whole group of characters will jump between the target and the attacker, and the attacker will either back off, intimidated by these numbers (if he's a Villain with Good Publicity, having underestimated the hero's popularity versus his own), or make an impressive Foe-Tossing Charge.

Unfortunately, what works for the hero can work for the villain too, and if the Big Bad has a Brainwashed victim or Face–Heel Turn-er around that the hero is unwilling to "go through," they can put an All-Loving Hero in a very tight spot. Don't try this on an Anti-Hero — you can't be sure they won't Shoot the Dog. In fact, don't try this on any hero with a gun, because they'll always find a way to slip a bullet past the victim's head and into yours.

A particularly powerful or numerous enemy in this situation leads to a You Shall Not Pass! situation.

This can also be Played for Laughs: Bob throws himself between Alice and his newest Precious, Precious Car, knowing that every time she borrows one of his cars, it comes back scorched, filled with bullet holes, and covered in alien guts… followed by Alice casually stepping around Bob, hotwiring the car, and driving off.

If this is said to (or by!) the Intangible Man, expect hilarity to ensue as he, she, or it is very likely to act as a Literal Genie. Also, in a rare horror situation, expect the recipient to literally tear the speaker in half and go through.

See also: Protest By Obstruction, Protected by a Child, Taking the Bullet, I Am Spartacus, sometimes used as a sneakier way to protect the hero. Contrast Pietà Plagiarism, Crucified Hero Shot. Liable to Threat Backfire.

After the Aledo survived the warp core blast and is in the process of destroying the Cerritos, Mariner and Petra arrive to help and reveal they brought every Cali-class in service with them to save them. Together, they destroy the ship that was planning on taking their jobs.

After the Aledo survived the warp core blast and is in the process of destroying the Cerritos, Mariner and Petra arrive to help and reveal they brought every Cali-class in service with them to save them. Together, they destroy the ship that was planning on taking their jobs.