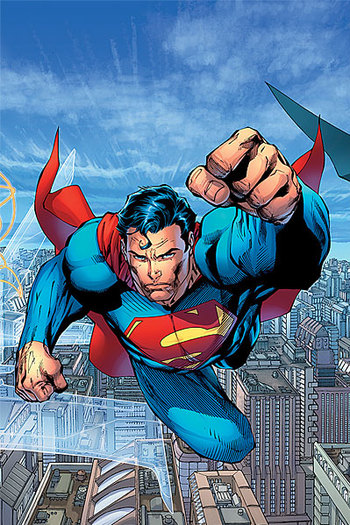 Superman, the Last Son of Krypton

Born on the planet Krypton, Kal-El was sent to Earth as a baby shortly before his planet exploded. Discovered and adopted by a couple living in the town of Smallville, Kal-El, now named Clark Kent, discovers his superpowers as he grows up. Learning of his Kryptonian heritage, Clark decides to dedicate his life to truth, justice, and the American way. Clark currently lives a double life in the city of Metropolis, as a mild-mannered reporter for the Daily Planet, and as Superman, the Man of Steel.

From the late Golden Age of Comic Books through the Bronze Age, Superman started his heroic career as Superboy in Smallville. This was Retconned out of history thanks to Crisis on Infinite Earths, and later recanonized after Infinite Crisis in Superman: Secret Origin. The New 52 origin in the Action Comics arc "Superman and The Men of Steel" decanonized this once again. Superman Reborn, an event that's part of the DC Rebirth relaunch, brought Secret Origin back into canon and removed the New 52 origin. As of Doomsday Clock #12, his stint as the original Superboy is back in continuity, as well as him having inspired the creation in the future of the Legion of Super-Heroes.