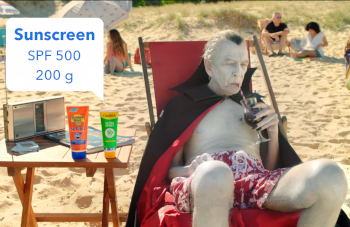 Weaksauce Weaknesses are great to exploit, but suck to have. However, clever and enterprising creatures of the night, aliens, mutants, robots or what-have-you's can create a limited resistance or immunity by counteracting its effects. Vulnerable to fire? Asbestos-fiber suit! Holy objects repel? Wear a Darwin-fish necklace!note (If the reason the creature's faith would matter more than the faith of the one wielding the religious object is even brought up, it's usually that the creatures' vulnerability to holy symbols is a case of Your Mind Makes It Real, and skepticism or having stronger faith in its own God of Evil protects it) Does water dissolve you? Coat yourself in water-proof paste! This doesn't even need to be limited to clothing, a sun-blocking satellite and a Protective Charm are among many possibilities to counter their weaknesses.
Advertisement:

Usually this resistance is limited in some way, it may be bulky or conspicuous, only works once, or rubs off over time. It's also possible for an enemy to somehow nullify the resistance with a counter... unless they have a counter to that counter.

Commonly used in response to the Kryptonite Factor when Kryptonite Is Everywhere. Speaking of Kryptonite, it certainly helps when you're trying to fight it off. Contrast Flaw Exploitation. Not to be confused with Removed Achilles' Heel, which involves someone developing a permanent way to rid themselves of a weakness rather than use an external protection. In some rare cases this can also crossover with Powered Armor, sometimes it doesn't hurt to have your suit that's able to nullify your weakness to also have a few tricks up its sleeve.

Doodle Patrick uses the magic pencil to kill a Jellien, unintentionally discovering that drawings drawn with jellien blood coating them are immune to the eraser.

Doodle Patrick uses the magic pencil to kill a Jellien, unintentionally discovering that drawings drawn with jellien blood coating them are immune to the eraser.