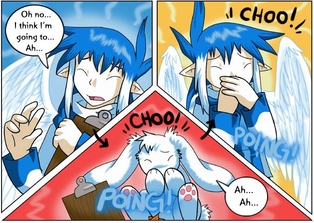 Gesundheit.
"In the heat of composition I find that I have inadvertently allowed myself to assume the form of a large centipede. I am accordingly dictating the rest to my secretary."
— A letter from Screwtape, The Screwtape Letters
Advertisement:

A character possesses some manner of Shapeshifting ability, but not the conscious ability to control when this ability kicks in.

This isn't necessarily as bad as it sounds — explanations are usually one of the following:

In any case, the character is generally aware they have this ability, and it's a recurring aspect of their character; the shapeshifter will generally try to avoid triggering their ability accidentally (e.g. Bruce Banner constantly warning people You Wouldn't Like Me When I'm Angry!); alternately, they can expose themselves to the trigger to deliberately invoke their ability when it's convenient (e.g. stimulus + container to hide it = instant Transformation Trinket); the line between voluntary and involuntary can get a little blurry, but unlike the Voluntary Shapeshifter, the involuntary one lives with a risk of transforming at the most inconvenient moments should their trigger hit them unexpectedly. (Even if they don't end up transforming very often, the potential for it is still there.)

Not to be confused with just any 'involuntary shapeshifting' in general, like a Forced Transformation (a popular source of many unexpected, involuntary transformations) or a Fisher Kingdom (where the shapeshifting power is a trait of the kingdom itself, not the person).

Frequently overlaps with Animorphism since animals are a popular choice for shapeshifting (both voluntary and otherwise) already. Being a Living Mood Ring often involves doing this.