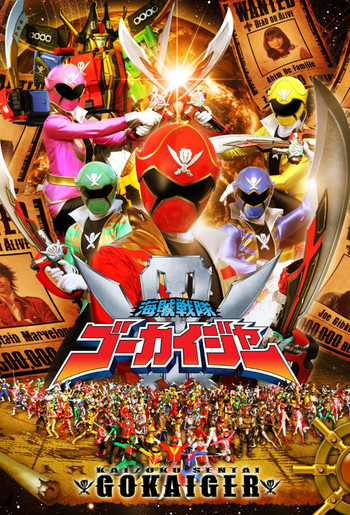 The Gokaigers. And all the others that came before.
"On a search for adventure and excitement, these youths went on a journey through the universe. They faced the Space Empire Zangyack and took the title of 'pirates'. They are...Kaizoku Sentai Gokaiger!"
Advertisement:

Kaizoku Sentai Gokaiger (roughly translated as "Pirate Squadron Gokaiger") is the 35th installment in the long-running Super Sentai franchise, airing from 2011 to 2012.

Instead of being directly adapted into a Power Rangers series, elements from the show were incorporated into the second half of Power Rangers Megaforce.

The Zangyack Empire, an evil galactic empire aiming to conquer Earth and turn it into one of their colonies, were defeated by the combined might of the thirty-four previous Super Sentai teams in an epic conflict called the Legendary War. However, this victory was achieved at the cost of the heroes' own powers, which were scattered across the universe.

Years later, a group of Space Pirates called the Gokaigers hear about the Greatest Treasure In The Universe, which is supposedly located on Earth. Arriving to find and plunder the Greatest Treasure, they accidentally stumble into the Zangyack Empire's second attempt at invading Earth. With the Zangyack responsible for the bounties on their heads and the assimilation of their home planets, the Gokaigers are drawn into a conflict they would rather not be a part of... if it wasn't for the promise of treasure at the end.

Along with their own suits and accompanying powers, the Gokaigers can use their Ranger Keys to transform into any of the previous Sentai heroes, inheriting all of their abilities. In addition to the Gokaigers forging their own storyline, the show features plenty of tribute episodes to the older teams that came before them, usually as a Pastiche of the tone and themes of the highlighted series and featuring at least one guest star.

for Super Sentai alumni to write messages of encouragement in-character to kids. The movement caught on like wildfire and led many actors (some of which had even retired) to contact the Gokaiger staff asking if they could be included in the production to help.

This caused the number of cameo/special episodes in the second half of Gokaiger to skyrocket.

Example of:
Evil Versus Evil