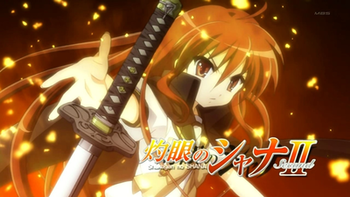 An eyecatch, or commercial bumper, is a short blurb displayed when a series goes to or comes back from commercial. Anime eyecatches tend to be either humorous, with a little musical sting played over them, or simple representative pictures with the series' name; they are often an opportunity for gratuitous Fanservice. Series that run for more than one quarter frequently will have several eyecatch styles over their run, sometimes with a small set of choices that rotate from episode to episode.

Saturday morning cartoons in North America frequently had one generic set of "we'll be back after these messages" Ad Bumpers per network, played at breaks for all of the series running on that network. Generally in the west, the term "bumper" applies more to this kind of EC, and bumpers are usually done by the broadcaster, rather than as part of the show itself. In the days of syndication, some syndicated cartoons would come with their own eyecatches, but these were typically rather generic (a still from the theme sequence and a voice saying, "We'll be right back" was usually the extent of it).

Not a subtrope of Eye Scream.