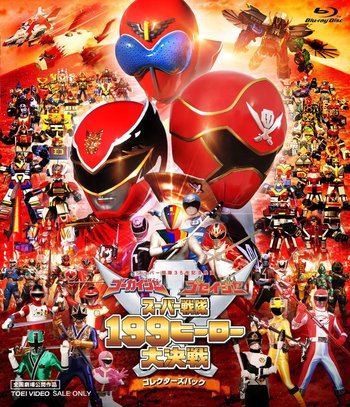 Gokaiger Goseiger Super Sentai 199 Hero Great Battle is a film released on June 11, 2011, to commemorate the 35th anniversary of the Super Sentai Series. The film stars the casts of Kaizoku Sentai Gokaiger and Tensou Sentai Goseiger, among the 199 total heroes from the Super Sentai series.

After combining their powers to destroy the first Zangyack Empire invasion force, the powers of the Super Sentai were scattered throughout the universe until they were picked up by the Gokaigers in the form of the Ranger Keys. Seeking to reclaim their powers, the Goseigers ambush the Gokaigers and reclaim their Ranger Keys, leading to a conflict between the two Sentai teams. As this is going on, the second Zangyack Empire invasion force forms an alliance with a revived Black Cross Army comprised of past Super Sentai foes in order to destroy the Super Sentai. Thus, to fight against this new enemy, the Gokaigers and the Goseigers team up.