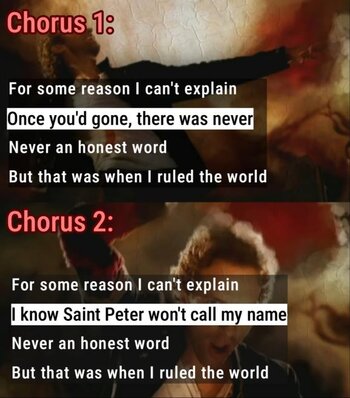 Most people think of choruses as the part of a song which doesn't change. However, there are always exceptions, and this trope is for those exceptions.
Advertisement:

Sometimes, the chorus will change a little every time. This is usually used for comedy, to make the song more interesting, or to make the song follow a storyline. Other times, the song will mainly stay the same, but have one chorus that's a bit different.

This is usually at the end, and it might be because the story has finished, so one of the lines is no longer true (e.g. "I'm waiting for the bus" might turn into "I waited for the bus" in the final chorus).

Compare Truck Driver's Gear Change, where a song modulates upward, Small Start, Big Finish for when the song's intensity rises, and Dual-Meaning Chorus for when the meaning of the chorus changes. Can overlap with Expository Pronoun or Character Development. Often happens in an Age-Progression Song. Compare Mad Libs Catchphrase. Contrast Limited Lyrics Song.