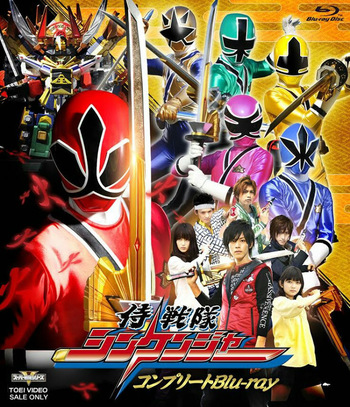 "With these brush strokes, we report to the emperor!"
"The Samurai Sentai authorized by the Providence!
Shinkenger! Going forth!"
Advertisement:

Samurai Sentai Shinkenger (roughly translated as "Samurai Squadron Shinkengernote "Shinken" translates in English as "True Sword") is the 33rd program in the Super Sentai series, airing from 2009 to 2010.

Since ancient times, the Shiba Clan have been fighting against the monstrous hordes of the Gedoushunote "Heretic Party": the demons that emerge from crevices to attack humans. When the 18th head of the Shiba Clan, Takeru Shiba, learns that the leader of the Gedoushu is close to regaining his full power, he is reluctantly forced to summon four others from his retainer families as back-up and form the Shinkenger.

Together, they protect the world from the Gedoushu using the power of "Mojikara"note "Character Power"; as in "letters" or in this case, "Kanji", an ancient magic based upon the drawing of certain characters. They are later joined by Genta Umemori, a Mojikara prodigy and childhood friend of Takeru who had been secretly training himself as the sixth Shinkenger.

As for the Super Sentai tradition of themes and motifs, Shinkenger picks up the Japanese Jidaigekinote Period dramas genre, drops it into a modern setting, and showed just how well awesome the concept can work, all the while keeping the theatricality intact. Also one to proudly take the stage is the Japanese culture: the Shinkengers live in the Shiba household, which is a feudal lord's mansion in present day, the monsters of the week are based on different Obake, and the Kanji used for fighting evil spirits just about anything, just for starters.

note Please understand that all translations are by no means the ONLY way to translate the words in question, and if your sources of choice (Fansub or dictionaries) varies, it is likely not wrong - it us just chosen another wording. Please offer any alternate translations on the discussion page

This work has Crowning Moment pages for Awesome, Funny and Heartwarming. We're also working on a Character Sheet, and migrating character tropes over there.

Aired alongside the Kamen Rider series Kamen Rider Decade, which it shared a crossover with, and then Kamen Rider Double in the Super Hero Time block.

Has been adapted into Power Rangers Samurai.

Yosh. A Clap of Victory. This brings this trope page to a close.
Feedback