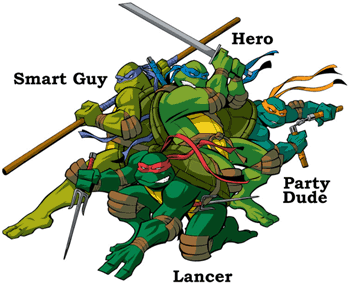 "Don't be shocked by the tone of my voice
Check out my new weapon – my Weapon of Choice."
— Bootsy Collins' vocal from Fatboy Slim's "Weapon of Choice"
Advertisement:

For non-weapon examples, see Tell Me How You Fight. Contrast Choice of Two Weapons and Walking Armory. Compare Weapon Specialization, which involves the choice of weapon itself more so than what it says about the wielder's personality. See also Adaptational Weapon Swap, Good Weapon, Evil Weapon, and Character-Driven Strategy. See Weapon Jr. for when someone's shown with a weapon of choice before they've chosen it. For an entire culture or race's weapon of choice, see National Weapon and Fantastic Race Weapon Affinity.