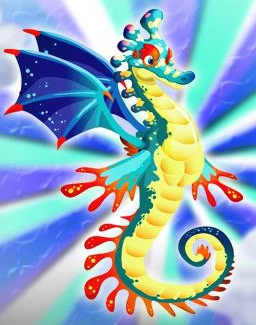 Seahorses are one of nature's Mix-and-Match Critters. Essentially, it is a fish, but with the tail of a monkey, the pouch (in males) of a kangaroo, swiveling eyes like a chameleon, encased in bony armor plating, swimming upright using its dorsal fin, and with a snout more like a snorkel than anything else nature has come up with. These odd features have led it to be associated with Eastern Dragons. According to some legends a seahorse is a baby dragon, and thus seahorses are often tied to dragons. Like Dinosaurs Are Dragons, this is largely an Eastern culture trope: most notably, the Japanese word for seahorse, tatsu-no-otoshigo, literally means "dragon's bastard child."

See Legendary Carp for another animal that turns into a dragon in Japanese Mythology. Also connected to Seahorse Steed, which are often large and rather like sea dragons.