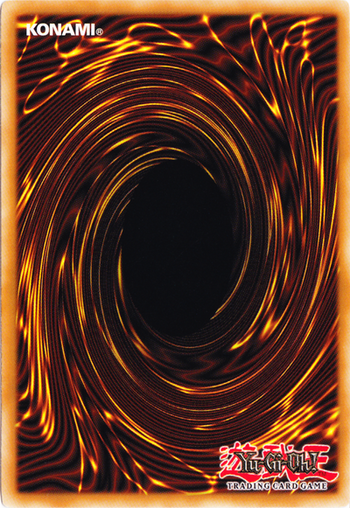 The standard Yu-Gi-Oh card back. Its design is meant to resemble that of a portal to another world.
"You've activated my Trap Card!"
Advertisement:

The Yu-Gi-Oh! Collectible Card Game is one of the most popular card games in the world and one of the pillars of the Yu-Gi-Oh! multimedia franchise. First released in 1999, the card game is developed and published by Konami.

The concept of the card game first appeared in the Yu-Gi-Oh! manga as an homage to Magic: The Gathering, of which author Kazuki Takahashi is a fan. Originally, the manga was intended to feature a new game every few weeks, with the card game (then known in-universe as Magic & Wizards) being one of many. However, Takahashi received large amounts of fan response immediately after the card game debuted in the manga, who wanted to know more about the game. Takahashi in response reworked the manga storyline to more prominently feature the card game, and gradually developed its game mechanics, which are loosely based on that of Magic, which generally agreed with how the characters played.

As the Yu-Gi-Oh! manga began to expand into a multimedia franchise, interest grew to defictionalize the game and turn it into a real game. Bandai released a version of the card game in September 1998 known as Yu-Gi-Oh! (Carddas Version), coinciding with the Toei anime adaptation (the Toei anime also renamed M&W to Duel Monsters as the game's in-universe name). Bandai and Toei's card game did not last, because around late 1998 and early 1999, Konami acquired the rights to the Yu-Gi-Oh! brand.

Konami properly released their version of card game in February 1999, as Yu-Gi-Oh! Official Card Game (before then, they also released a brief series of unplayable collector cards). This is the game that stuck and became the centerpiece of the Yu-Gi-Oh! franchise. The real game made considerable changes to the rules originally established by Takahashi, and so the manga and anime were revised to more closely reflect the rules of the real game. Aside from the Dungeon Dice Monsters arc in the anime and the Capsule Monsters spin-off, all future media works in the Yu-Gi-Oh! franchise focused exclusively on Konami's card game.

Yu-Gi-Oh! has different names and administration structures in different territories. The so-called Official Card Game, or OCG, has been handled by Konami since the beginning; it administers East Asia. The other administration setup, called the Yu-Gi-Oh! Trading Card Game, or TCG, was originally manufactured and distributed by Upper Deck Entertainment, at Konami's own behest, throughout the remaining territories worldwide. However, in 2008, UDE lost the license amid some allegations of wrongdoing, and now the TCG is administered by Konami as well. The game is mostly identical on each side of the Pacific; the only differences are that some cards that debut under one administration do not appear in the other for a good, long while, if ever; there are some difference about the Damage Step rules; the Forbidden/Limited lists on each side differentiates since September 2013; and, Konami alters some card artwork to prevent incidents with Moral Guardians.

In 2020, Konami released Yu-Gi-Oh! Rush Duel alongside the anime Yu-Gi-Oh! SEVENS. Rush Duel, though sometimes described as a format, is technically a distinct card game with mechanics strongly derived from Yu-Gi-Oh! but incompatible with it. Rush Duel is currently exclusive to Japan and Korea.