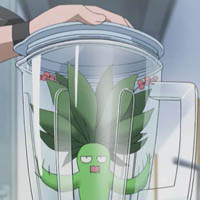 Proposed alternate measure:
Will It Blend?
"Boy, if those employees weren't robots, I would have looked like some kind of serial killer or something, eh?"
— Dr. McNinja, The Adventures of Dr. McNinja
Advertisement:

Advertisement:
Starting with the least likely to be granted rights...

This is often one of the reasons why Humans Are the Real Monsters. It can get especially awkward, however, when it happens in works of fiction where many of the heroes aren't human either, leading to uncomfortable Fridge Logic. If a human begins to actually value a non-human being or species more after their death, then that's Death Means Humanity.

Carl's death would be cause for an R-rating if he had been a human!

Carl's death would be cause for an R-rating if he had been a human!