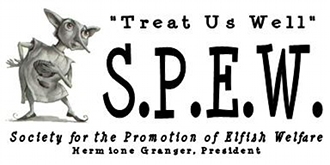 Support the cause! Buy T-Shirts!
...that have been made with unpaid house-elf labor!
"Zombies are our friends," asserts Hypno-shroom. "They're badly misunderstood creatures who play a valuable role in our ecology. We can and should do more to bring them round to our way of thinking."
—Hypno-Shroom's Almanac Entry, Plants vs. Zombies
Advertisement:

Civil Rights activists care, so much so that opponents derisively label them "bleeding hearts." But what they fail to consider is that the Zombie Advocate's friends may well rip it from their chest.

The Zombie Advocate is a (usually) normal person who advocates for the "human rights" of... well, things other than humans. Not just zombies, but also robots, monsters, and other inhuman creatures that may inhabit the setting. They will argue against killing them and make a case that they're not dangerous, but Reluctant Monsters who are no different from human at all. Well, except for being demons, clones, made of metal and/or having died.

They may not even be that far off. If the creature being advocated for is genuinely good the Zombie Advocate can get the Hunter of Monsters to stop from committing a Van Helsing Hate Crime they might regret. In more idealistic stories they're instrumental in getting the angry villagers (or disdainful scientists) and the misunderstood monster to reconcile — until some idiot goes invoking an Interrupted Cooldown Hug, that is. Interestingly, they may well have hated or feared the monster just like everyone else, only changing their mind after discovering their gentle side.

On the other hand, the Zombie Advocate may have that hand bitten off by the "person" they're "helping."

In settings where the monsters really are evil inhuman murderers, this position becomes suicidally misguided. When a loved one is turning or turned into a monster, the Zombie Advocate may go into denial and hide their condition or pretend nothing is wrong. While trying to protect them from discovery and destruction is understandable, it is no less suicidal or genocidal. Extremely far gone advocates may even try to care for them and "feed" them. Of course, if the non-human is intelligent, it may well be the creature is tricking them or offering conversion.

In both these latter cases, they usually die at the hands of their "loved one".

See also Inhumanable Alien Rights, which is what a justified Zombie Advocate is fighting for. Compare Black Shirt, Supporting the Monster Loved One, and Gullible Lemmings. Death Means Humanity may be part of the zombie advocate's backstory and be the reason why they hold their views. Not to be confused with soulless lawyers. Mama Didn't Raise No Criminal is when human monsters get this treatment.