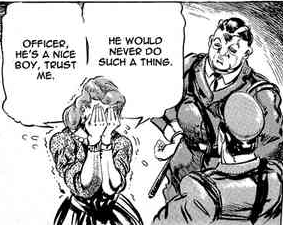 Don Brodka: I'm afraid your son broke the eleventh commandment: Thou shalt not steal.
Marge: That's crazy. Bart's not a shoplifter, he's just a little boy.
Don Brodka: Oh, sure, now he's just a little boy stealing little toys. But some day, he'll be a grown man stealing stadiums and...er, quarries.
Marge: My son may not be perfect, but I know in my heart he's not a shoplifter.
— The Simpsons, "Marge Be Not Proud"
Advertisement:

It's not unusual for fiction to depict the effects crime can have on the criminal's family. This trope is about when the criminal's family reacts with either disbelief, disavowal of responsibility or, if they're hedging their bets, both. When confronted with evidence of serious wrongdoing, they often go through predictable emotional processes, most prominently denial. Denial as a psychological phenomenon can manifest in many forms, and they may just have Failed a Spot Check on the criminal's behavior.

When a family member or guardian is brought face-to-face with strong evidence that their child or more rarely other relative is a criminal, it will of course affect them in different ways. Some will sadly accept it and move on with their lives; some will be angry at their child but maintain ties. To fall under this trope, though, the family must either:

Whichever way it is expressed, this trope can sometimes be used to help show that it is not just the victims' lives and families that are disrupted by serious crime, to humanise a criminal character, or for laughs.

Even if these reactions apply only temporarily, they count. People change, and few people in fiction or real life remain in denial their whole life.

Contrast: The Family That Slays Together, where not only did the parents raise their kids to be criminals, but also treat crime as a family activity, and Don't Tell Mama, where the child tries to hide their criminal behavior from their parents.

Compare Parental Obliviousness, where the parents never realise their offspring is a criminal or otherwise unsavory — subconscious cases of Mama Didn't Raise No Criminal might be stopping them from seeing the truth in some cases. Also compare I Have No Son!, where family members deny even the physical fact of their blood relationship.

See also Even Bad Men Love Their Mamas and Even Evil Can Be Loved.

You've been sending him money

Katherine confronts her mother after learning she's wiring money secretly to Zach after what happened in Turkey. However, the money was secretly also used to fund Zach's operations as Mal'akh. Katherine had to remind her that he nearly killed his own father.

You've been sending him money

Katherine confronts her mother after learning she's wiring money secretly to Zach after what happened in Turkey. However, the money was secretly also used to fund Zach's operations as Mal'akh. Katherine had to remind her that he nearly killed his own father.