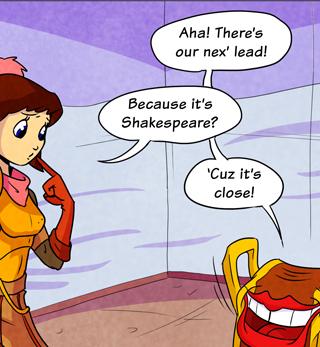 Genre Savvy living in a RPG Mechanics 'Verse
Convenient questing is a convention of Adventure Games and RPGs. Your next destination will be the closest area that you haven't been able to get to before.
Advertisement:

This trope makes sense: it is counterproductive to send players through areas with high-level monsters. Similarly, putting the Sword of Plot Advancement or Infinity Minus/Plus One Sword in the town next door kills the game. Long travel times are dull, and they may require creating landscapes that aren't used for anything else in the game. Convenient Questing avoids this and is economical with design time.

Some games will justify this via the plot. For example a chase for someone who you have always just missed when you reach the next town.

Convenient questing can also be a way to ensure that the player gets all the required plot exposition. In Tabletop RPGs it can herd players through areas with no monsters or treasure but packed full of history and epic folk poems.

Accessing the next area may require you to Get on the Boat or fix the Broken Bridge. A softer version is the Beef Gate.