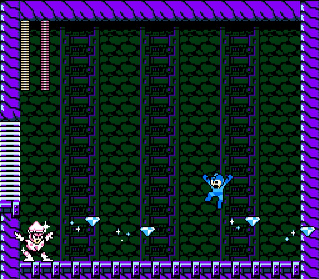 Prepare to be jeweled.

Gems in the realm of fiction are often either a battery for some uberfied Doomsday Device or just some fancy-dancy decoration. In at least several occasions, an Uncle Pennybags will simply show off the jewels in question as proof of his wealth. But some people prefer showing off their shiny jewels the violent way, mostly in the form of projectiles. And considering that they're much harder than ordinary rocks, painful injuries will most certainly ensue...big time.

May be the result of the ability to turn body parts into gems.

A Sub-Trope of Dishing Out Dirt (since gems are still from the earth).

Compare Elemental Embodiment (when the being itself is made out of jewels and decides to land a physical blow), The Power of Glass (ability to form and manipulate glass), An Ice Person (manipulating ice crystals, among other cold things), Crystal Weapon (when the gemstone itself is shaped into a weapon), Power Crystal, Mineral MacGuffin.

Ephedians, both heroes and villains, are capable of magically conjuring crystal-based attacks, either by summoning them from the ground or as a Projectile Spell.

Ephedians, both heroes and villains, are capable of magically conjuring crystal-based attacks, either by summoning them from the ground or as a Projectile Spell.