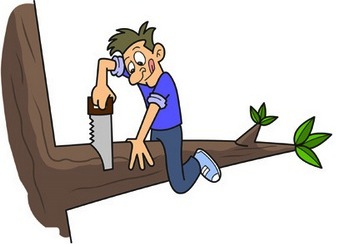 Even Wile E. Coyote wouldn't do that. note He would cut from the other end. The branch would then stay and the tree would plummet.note Also see Ralph Wolf.
"A Chronicle of Enterprising Demises Honoring those who improve the species... by accidentally removing themselves from it!"
While I have common sense I rarely let it interfere with my actions, preferring to use it to analyze why I shouldn't have done what ever it is that I did to cause the most recent Darwin moment.
—James Nicoll
Advertisement:

Although Internet-based, the Darwin Awards have released books authored by Wendy Northcutt detailing the "winners" of that year.

There are four categories:

See also 1000 Ways to Die, which is based on a similar premise (the major difference is that 1000 Ways To Die doesn't really care about the death being due to stupidity if it's spectacular and/or bizarre enough).

Finally, there was actually a film (The Darwin Awards) based off of some of the stories from this site. A few of the stories were also tested by the Mythbusters (who, incidentally enough, made cameo appearances in the movie).

NOTE: People who take out innocents in the process of removing themselves from the gene pool are expressly disqualified from Darwin Awards consideration by the website, thus instantly disqualifying all drunk drivers if they hit someone. (This rule was not in the first version of their ruleset, thus some of the early Darwin Awards did mention the death or injury of bystanders.) This rule has its own exception, namely: if anyone in their right mind would flee the area if they saw what the contender was doing, and a bystander stays to watch, then the contender can still get nominated on the grounds that the bystander will probably also get nominated. People with mental disorders are also disqualified as Wendy sees these deaths as just plain tragic (Diminished mental capacity due to alcohol or other drugs is permitted, because such people chose to diminish their mental capacity with drugs of their own free will). Youths under the age of 16 are generally disqualified unless a majority of the youth's peers agree the action taken by the nominee was incredibly stupid. Anyone who won before a rule change, that would have disqualified them, gets to keep the award as part of a Grandfather Clause. Finally, there was an unofficial rule change that says the nominees must have unintentionally caused the incident as to prevent people from harming themselves to try to win. There are a few exceptions due to the aforementioned grandfather clause.

Fictional examples of this kind of activity go on Too Dumb to Live.

The Darwin Awards contain examples of the following tropes: