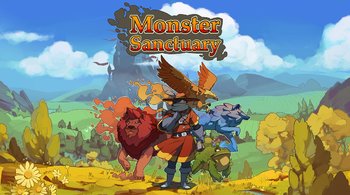 A Keeper, with the four Starter Mons.
Advertisement:

is a Mons Series RPG combined with a 2D Metroidvania platformer, with each tamed monster having special abilities to traverse the world. Developed by Moi Rai Games, and published by Team17 Digital Ltd. (the company that made Worms), an Early Access build of the game was released through Steam on 28 Aug, 2019, and the full version was released on December 8, 2020.

You play as the latest in your family's lineage of Monster Keepers, people with the ability to tame monsters. To hone your skill, you are sent to Monster Sanctuary, a land where Monster Keepers live in harmony with monsters they raise. But the arrival of unusually powerful monsters has broken the peace among the land. It's up to you and your peers to go on a journey to try to unravel this mystery!