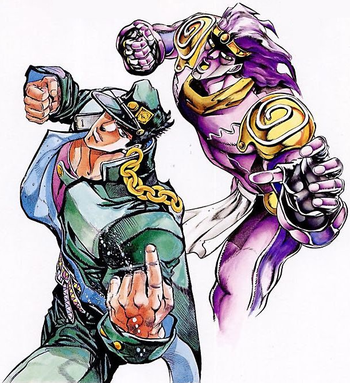 Star Platinum's always got your back.
Zenkichi: [W]hat's with the chained-up knight thing?
Morgana: That's the rebel in your heart awakened: the power of your Persona.
Zenkichi: A rebel, huh... Hey, fine by me. I don't understand a damn thing, but if it can help me fight, I'll take it.
— Persona 5 Strikers

A Fighting Spirit is when a person's ki/mana/spirit/psychic power is manifested in a physical form that acts on its own. They don't need to lift a finger to punch you; their ki will do it for them. This usually resembles Summon Magic, except that it's an extension of the user rather than a separate entity. This can sometimes manifest as an Animal Battle Aura. See also Guardian Entity, Tulpa, Astral Projection and Shaping Your Attacks. Sub-Trope of Powers Do the Fighting.

For the other kind of Fighting Spirit, see Heroic Resolve.