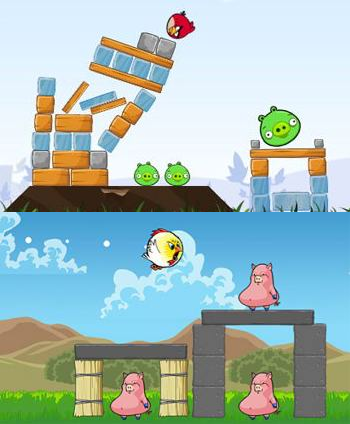 No, Chik'N Bash is not an Angry Birds ripoff.
Pink pigs. Chickens. See? Totally original.note Ironically, Angry Birds is also a clone of another game, Crush the Castle.
Advertisement:

When an attempt to Follow the Leader seems to be almost exactly like the leader, but with cosmetic identifiers (the "serial numbers") changed. The blatant copying of characters and plot is on a level that would make even makers of The Mockbuster blush. (Although that needn't mean the quality is bad....)

Sometimes this can be by the very creators of the source work, perhaps as a form of applying Captain Ersatz to an entire series (see Alternate Company Equivalent).

The trope can also be used to write a crossover story without having the rights to the other franchise.

So named because some stolen goods (particularly firearms) would have their identifying serial numbers filed off to make them untraceable.

Robert A. Heinlein used this exact term in his book Glory Road: "That's the way with writers; they'll steal anything, file off the serial numbers, and claim it for their own."

Compare Mission-Pack Sequel (when a follow-up is almost just like the first game), Better by a Different Name, Spiritual Successor, Spiritual Adaptation, They Copied It, So It Sucks!, Recycled Script, Divorced Installment.

Contrast Dolled-Up Installment, In Name Only (both are when a work seems to have the serial numbers of another work scribbled on), Shoddy Knockoff Product (a ripoff that seeks to look like a work, but is a very poor copy) Lawyer-Friendly Cameo (when shown as part of a work of fiction), Bland-Name Product.

No examples, please. While not Flame Bait by definition, certain events involving complaining about shows that borrow even the slightest of ideas have driven it into this.