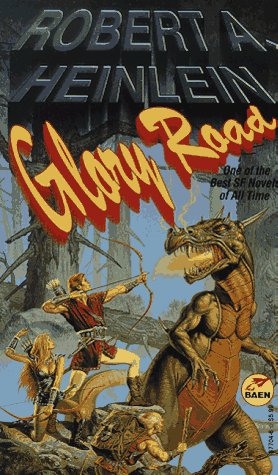 That cover is both entirely accurate and grossly misleading.
ARE YOU A COWARD? This is not for you. We badly need a brave man. He must be 23 to 25 years old, in perfect health, at least six feet tall, weigh about 190 pounds, fluent English with some French, proficient with all weapons, some knowledge of engineering and mathematics essential, willing to travel, no family or emotional ties, indomitably courageous and handsome of face and figure. Permanent employment, very high pay, glorious adventure, great danger. You must apply in person...
Advertisement:

Glory Road is a Science Fiction novel written by Robert A. Heinlein and published in 1963, originally in serial form. It is a Reconstruction of the standard pulp adventure novels of the era.

The Hero, Oscar Gordon, is a dashing ne'er-do-well who gets through life mainly by figuring out creative ways to avoid any real responsibility, while practicing such esoteric arts as swordsmanship. The Damsel in Distress, Star, is in reality an Empress, who is seeking out Oscar because a very sophisticated computer analysis determined him to have precisely those qualities needed to rescue the Egg of the Phoenix, a device containing all the accumulated wisdom of millennia of Emperors and vital to ruling the Twenty Universes. She is accompanied by a shifty fellow by the name of Rufo who seemingly embodies all the dirty fighting tricks known to mankind.

Together they embark on a swashbuckling romp to confront the thief, in which all of Oscar's qualities come into play. After an exceedingly narrow victory, the triumphant hero travels to Star's planet where he marries her and becomes her consort, with all the riches and knowledge of the Twenty Universes at his command. Then he discovers that he's completely unsuited to this life and is far happier out on the Glory Road having adventures.

Not to be confused with another science fiction novel, Alan Dean Foster's Glory Lane.