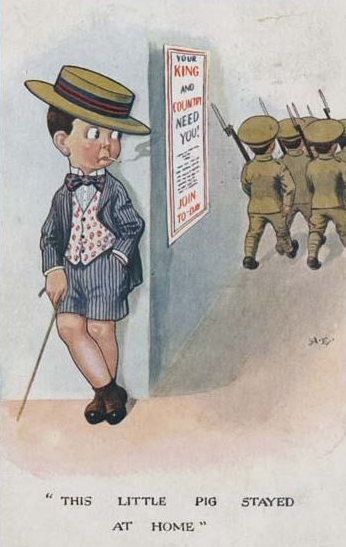 "And when it came my time to serve
I knew 'Better Dead than Red'
But when I got to my ol' draft board, buddy
This is what I said:
Sarge, I'm only 18
I got a ruptured spleen
And I always carry a purse
I got eyes like a bat
And my feet are flat
And my asthma's getting worse!"
— Phil Ochs, "Draft Dodger Rag"
Advertisement:

It's about this: A character (Always Male for obvious reasons) doesn't want to be conscripted by the armed forces. He may have different reasons, and find different ways to do it, which may or may not work. The type of hero that usually gets put in this kind of situation is often an average worker, or even outright poor, as a person from the higher classes of society usually have relatively easy methods to exempt themselves from serving (or if they can't, use said methods to get themselves a cushy position away from the frontlines) while avoiding the negative repercussions in the process.

An alternative for Draft Dodging is getting smart. That means volunteering in a unit with little to do with actual military, such as National Guard, Coast Guard, or Border Guard, or pulling the strings and/or gaming the system by getting yourself in a non-fighting position, such as company clerk, vehicle mechanic or drill instructor. Of course, even this isn't foolproof, as in the US, the Coast Guard and National Guard can both be (and especially in recent years, often are) mobilized to the front lines, and even Soldiers at the Rear might find themselves on the front due to the needs of the service or surprise enemy attacks.

This is a trope that may become a Dead Horse Trope in the next few decades, as more and more western states abolish conscription. There is still draft registration in the United States, but it is so politically unacceptable that the laws regarding registration are not enforced. note The "Selective Service" system requires all eligible males between the ages of 18-25 to register for the draft. Failure to do so is punishable, but few, if any, are ever punished. Resident aliens, on the other hand, must register or face deportation, and this is enforced. Additionally, draft registration is mandatory to receive federal student aid or to apply for a government job. There's also the argument that the US military prefers an all-volunteer army, as the quality of troops tends to be much higher when the troops want to be there. Whether American conscription is ever revived is debatable. The US has proven it can fight protracted wars without conscription, but the full impact of this has yet to be seen and a future war with higher casualties may force the draft to be revived. This is also something of a required trope for the "chickenhawk" variant of Miles Gloriosus: the War Hawk who claims the nation's military is their greatest pride, while quietly shoving a heavily doctored medical report under the table.