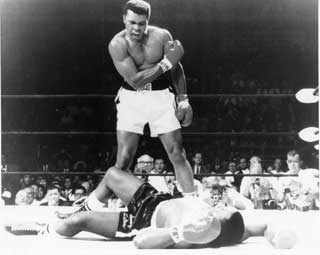 Get up and fight, sucka!
"Float like a butterfly, sting like a bee. Your hands can't hit what your eyes can't see."
Advertisement:

Muhammad Ali (born Cassius Marcellus Clay, Jr., January 17, 1942 – June 3, 2016) was an American professional boxer, generally regarded as the most significant heavyweight in the history of the sport (or, at worst, tied with the great Joe Louis). In his career, Ali was known for combining strength, skill, brilliant tactics, and elegant but incredible braggadocio. He was named "Sportsman of the Century" by Sports Illustrated in 1999. He took up boxing as a teenager after a police officer and boxing coach advised the 12-year-old Clay to learn how to box before he tried to "whup" the guy who stole his bike. Fighting for several years as an amateur, he won gold at the 1960 Summer Olympic Games in Rome at the age of 18; he decided to leverage that medal into a professional career. He fought professionally for 18 years (with a three-year sabbatical when his license was suspended due to draft resistance. The U.S. Supreme Court would overturn his conviction) in 61 bouts, retiring with 56 wins, 37 by way of knockout. Three of his five losses came in the last three years of his career, when he was well past his prime and starting to show early symptoms of Parkinson's disease.

Along the way, Ali won the heavyweight championship three times, defeated every top heavyweight contender from 1964 to 1975, and is often regarded as one of the greatest (if not the greatest) boxers (if not athlete) of all time. Although he fought with an orthodox (right-handed) stance, Ali's style of fighting was very unorthodox, relying on his agility to dodge punches, rather than blocking them outright. He also had a potent combination of incredible hand speed, prodigious reach, boundless stamina, and one of the best chins in boxing history (which meant even if you could touch him, he could still take the punch). Ali was also a master of the psychological elements of boxing, frequently taunting his opponents and 'calling' his knockouts (by stating the round he believed the KO would happen before the fight).

In 1964 Ali, in his own words, "shook up the world" when as an 8-1 underdog he defeated the fearsome Sonny Liston to win the heavyweight championship (Liston retired on his stool after six rounds, citing a shoulder injury). They had a rematch a year later, which ended in controversy and accusations that Liston had thrown the fight after being knocked out in the first round by a seemingly innocuous punch. Over the next two years, the new champion made a further eight successful title defenses. However, his knockout of veteran contender Zora Folley in March 1967 would be his last fight for over three years.

Ali had originally been declared ineligible for military service after failing an Army IQ test in 1964. The military subsequently lowered their standards and Ali was now considered eligible. Ali declared that he would refuse to join the Army and serve in Vietnam (although in all likelihood, he would have served his time entertaining troops in exhibition matches like Joe Louis did in World War II), and referred to himself as a 'conscientious objector'. He was convicted of draft evasion, fined $10,000 and sentenced to five years in prison (suspended pending his appeal). His boxing license was revoked and almost all boxing authorities withdrew recognition of him as world champion.note A notable exception was Ring Magazine, whose editor Nat Fleischer insisted that Ali could only lose his title if he was beaten in the ring or retired Ali launched an appeal, and in 1971 the US Supreme Court would overturn his conviction.

With his appeal still ongoing, Ali finally regained his licence to box in 1970 and returned to the ring with comeback victories over contenders Jerry Quarry and Oscar Bonavena before facing off against new champion Joe Frazier in an event billed as the "Fight of the Century". The epic fight lived up to its billing and Frazier won a hard-fought 15 round decision, handing Ali his first loss. On the comeback trail, Ali suffered a setback when he lost to the previously unheralded Ken Norton in 1973, but he beat Norton in a tough rematch to get another chance to reclaim the title in 1974. This time his opponent was George Foreman, who had easily dispatched Frazier and Norton in two rounds apiece, in a bout staged in Zaire that Ali nicknamed "The Rumble in the Jungle." In that fight, depicted in the Oscar-winning documentary, When We Were Kings, showed that although Ali had slowed down, he was able to outwit the younger challenger with his famous rope-a-dope strategy to wear Foreman until Ali downed him like a oak tree. A year later Ali faced his old rival Frazier for a third time, the so-called "Thrilla in Manila". Fought in tropical conditions, the fight was among the most brutal in boxing history. The action went back and forth, and Ali would later say he felt as if he was close to death. He eventually won when Frazier's corner refused to let their man come out for the final round.

This was probably the point where Ali should have called it quits with boxing. He frequently announced his retirement, but his ego and his ongoing need for money (years of profligate spending and a couple of costly divorces had eaten up the millions he earned in the ring) meant he carried on fighting. There was also an ill-advised and farcical fight against martial artist and wrestler Antonio Inoki in Tokyo in 1976note The event's rules severely restricted Inoki's move set and skewed it heavily in Ali's favor. So, Inoki spent most of the bout crawling on his back and repeatedly kicking at Ali's legs. This ended up having serious consequences for Ali, as it caused blood clots in one leg, which went untreated until he eventually had to be hospitalized. Although Ali downplayed the seriousness, the lingering effects were serious enough that doctors considered amputation and Ali suffered reduced mobility for the rest of his boxing career. By now Ali's speed and reflexes had noticeably diminished and he began to take more punishment. He nevertheless kept on winning fights thanks to his bravery and ring smarts, some careful matchmaking, and at times some questionable judging. He did make history in 1978 by becoming the first three-time heavyweight champion, after losing his title to the inexperienced Leon Spinks and then winning it back six months later. He retired once more, before mounting a misguided comeback attempt in 1980, this time against his former sparring partner (and now champion) Larry Holmes. It soon became obvious that Ali had nothing left and the result was a one-sided beating which ended when Ali's corner threw in the towel after the tenth round, the only time Ali was stopped in a fight. Ali finally retired in 1981 following a loss to journeyman Trevor Berbick.

In the final years of his career, Ali was already showing early signs of Parkinson's disease. In retirement, Ali still made periodic appearances in public, but Parkinson's disease ravaged his body and repeated head trauma ravaged his mind. He was no longer the eloquent, witty speaker he once was (in fact, he couldn't speak at all anymore), and was largely restricted to a wheelchair. His most famous post-retirement appearances were the 1996 Olympic Torch lighting and holding the Olympic Flag for the 2012 games. Sadly, Ali went down for the count for the last time when he passed away in Scottsdale, Arizona on June 3, 2016, after respiratory complications. He was 74 years old, having fought his battle against Parkinson's for 32 years. (Perhaps the most famous other celebrity with the condition is Michael J. Fox, who as of 2022 has battled the condition for 31 years.)

Aside from his achievements in the ring, Ali was a noted philanthropist and social activist. His name change came from his conversion to the Nation of Islam, and he was good friends with Malcolm X (he would convert to orthodox Sunni Islam in 1975, just over ten years after Malcolm X, and would later become interested in the Sufi teachings of Inayat Khan).note Ali did not, as is commonly reported, "convert" to Sufism; he never made any pledge to a murshid (and in fact turned down the opportunity more than once) and never affiliated with any Sufi organization more than casually. Lesser known are his contributions to his hometown of Louisville, which has come to embrace him wholeheartedly, going so far as to add his name to that of the city's main airport in 2019.Meaningless aside The other really famous person of the era from Louisville, Hunter S. Thompson, was a very big fan, and got unusually full access to him before one of his early 1970s fights.

Ali was also quite The Casanova with a legendary appetite for women. He was married four times: to Sonji Roi (1964-66), Belinda Boyd (1967-77), Veronica Porché (1977-86) and Lonnie Williams (1986-2016) and also had countless extra-marital affairs. He once notoriously introduced his mistress (and future wife) Veronica as his wife to Ferdinand Marcos, prompting a very public row with his actual wife Belinda. His marriages and affairs produced at least eight children (seven daughters and one son).note Belinda suspected there were more He later adopted another son with Lonnie. His daughter, Laila Ali, also became a professional boxer (against her father's wishes) and once fought Joe Frazier's daughter Jackie.

There have been numerous books, movies, magazine articles, advertisements and video games that have featured Muhammad Ali or depicted him. He was even the star of a Saturday Morning Cartoon in the 1970s, and had his own pinball machine in the 80s. In one of his most famous pop culture appearances, he literally gave Boxing Lessons to Superman! The most prominent work to feature Ali was an ESPN documentary about the buildup for his fight with Larry Holmes in the twilight of his career. Ali's star on the Hollywood Walk of Fame is the only one to be on the wall out of deference to his namesake, The Prophet Muhammad.note As it is a cultural taboo in Islam to have the Prophet's name be desecrated by being stepped upon among other things.

, the first major shopping mall in the Philippines, was named in his honour shortly after Thrilla in Manila. Jorge Araneta, a member of the Araneta family, laid plans for the mall in 1975 to commemorate the historic boxing match, and Ali was so overjoyed that he did not charge any royalties for the use of his name. The mall was inaugurated in 1976, with Ali himself attending the opening ceremony. A memorial to Ali can be found on the ground floor of the mall, where a tribute

Above anything else, Muhammad Ali was a fierce competitor, to Determinator levels. In the most iconic photograph of Ali (seen above) he really is shouting at Liston, "Get up and fight, sucker!"

In case anyone is curious, there is no connection between this man and the Albano-Ottoman general

that became an effectively independent viceroy of Egypt in 1805; there's a reason why international Muslims refer to him as "Muhammad Ali Clay", after all.