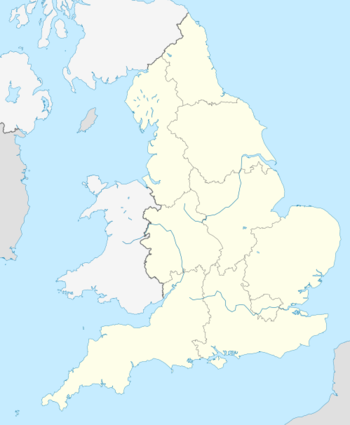 The most populous of the four countries forming the United Kingdom and home to the nation's capital and largest city, London, England is the home of the English language, which is spoken across the world today, and the Industrial Revolution, becoming the world's first industrialized nation.
Advertisement:

England's name is derived from the Old English name Englaland, which means "land of the Angles". The Angles are one of the Germanic tribes from what are now Germany and Denmark who migrated to and settled in England during the Middle Ages alongside the Saxons and Jutes, displacing much of the native Celtic Briton population, who now form the Cornish, Welsh and Breton peoples, and fragmenting England into roughly a dozen kingdoms. Before that, England was invaded and conquered by the Romans in 43 AD, becoming known as Britannia province, with their rule ending in 410.

The Danes later conquered the north and east of England, with The House of Wessex being left as the only surviving English kingdom under Alfred the Great. Under his successors, it steadily expanded at the expense of the kingdoms of the Danelaw, with England becoming politically unified under Aethelstan and definitively established by Eadred in 954. England was then later conquered by Sweyn Folkbeard in 1013 and again his son Cnut in 1016, becoming personally unified with Denmark and Norway as the North Sea Empire and the centre of that empire, but the native royal dynasty was restored with the accession of Edward the Confessor in 1042. After a dispute over his succession, England was then conquered by the Normans, Norse settlers mixed with the indigenous Franks and Gallo-Romans of Normandy in France, in 1066, led by Duke William of Normandy. This conquest led to the almost total dispossession of the English elite and its replacement by a new French-speaking aristocracy, whose speech had a profound and permanent effect on the English language.

The House of Plantagenet from Anjou inherited the English throne under Henry II, adding England to the budding Angevin Empire of fiefs the family had inherited in France, and reigned for three centuries. The Magna Carta was signed in this period, an English legal charter used to limit the sovereign's powers by law and protect the privileges of freemen, and the Principality of Wales became a Plantagenet fief during the 13th century and the Lordship of Ireland was given to the English monarchy by the Pope.

In the 14th century, the Plantagenets and the House of Valois both claimed to be legitimate claimants to the House of Capet and with it France, resulting in The Hundred Years War between England and France. The Black Death also hit England in 1348, killing up to half of it's inhabitants. The Wars of the Roses began in 1453, with the Yorkists eventually losing the throne entirely to a Welsh noble family the Tudors, a branch of the Lancastrians headed by Henry Tudor who invaded with Welsh and Breton mercenaries, gaining victory at the Battle of Bosworth Field where the Yorkist king Richard III was killed.

Under Tudor, The Renaissance reached England through Italian courtiers, who reintroduced artistic, educational and scholarly debate from classical antiquity. At the same time, England began to develop naval skills, and exploration to the west intensified. Henry VIII then broke from communion with the Catholic Church over issues relating to his divorce under the Acts of Supremacy in 1534 which proclaimed the monarch head of the Church of England, and legally incorporated Wales into the Kingdom of England with the 1535–1542 acts, with internal religious conflicts occurring during the reigns of Henry's daughters.

England competed with Spain in the colonization of the Americas and the Dutch and French in Asia, with the first English colony in the Americas being founded in 1585 by explorer Walter Raleigh in Virginia and named Roanoke, becoming known as The Lost Colony of Roanoke after it was found abandoned on the return of the late-arriving supply ship. England and Spain then became at war during the Elizabethan period, with Spain attempting to invade England, but failing. The political structure of the island changed in 1603, when the King of Scots, James VI, a kingdom which had been a long-time rival to English interests, inherited the throne of England as James I, thereby creating a personal union. He styled himself King of Great Britain, although this had no basis in English law, and under the auspices of King James VI and I the Authorised King James Version of the Holy Bible was published in 1611. It was the standard version of the Bible read by most Protestant Christians for four hundred years until modern revisions were produced in the 20th century.

The English Civil War soon began, with the Parliamentarians ending up victorious, Charles I being executed as a result and the kingdom replaced by the Commonwealth. The leader of the Parliament forces, Oliver Cromwell, declared himself Lord Protector in 1653, and after his death and the resignation of his son Richard as Lord Protector, Charles II was invited to return as monarch in 1660, in a move called the Restoration. After the Glorious Revolution of 1688, it was constitutionally established that King and Parliament should rule together, though Parliament would have the real power, with the Bill of Rights establishing it in 1689. Among the statutes set down were that the law could only be made by Parliament and could not be suspended by the King, also that the King could not impose taxes or raise an army without the prior approval of Parliament. Also since that time, no British monarch has entered the House of Commons when it is sitting, which is annually commemorated at the State Opening of Parliament by the British monarch when the doors of the House of Commons are slammed in the face of the monarch's messenger, symbolising the rights of Parliament and its independence from the monarch. With the founding of the Royal Society in 1660, science was greatly encouraged.

London was ravaged by the Great Fire of London in 1666, but rebuilt shortly afterwards with many significant buildings designed by Sir Christopher Wren. In Parliament two factions had emerged – the Tories and Whigs. Though the Tories initially supported Catholic king James II, some of them, along with the Whigs, during the Revolution of 1688 invited Dutch prince William of Orange to defeat James and ultimately to become William III of England. Some English people, especially in the north, were Jacobites and continued to support James and his sons. After the parliaments of England and Scotland agreed, the two countries joined in political union, to create the Kingdom of Great Britain in 1707, and to accommodate the union, institutions such as the law and national churches of each remained separate.

Under the newly formed Kingdom of Great Britain, output from the Royal Society and other English initiatives combined with the Scottish Enlightenment to create innovations in science and engineering, while the enormous growth in British overseas trade protected by the Royal Navy paved the way for the establishment of The British Empire. Domestically it drove the Industrial Revolution, a period of profound change in the socioeconomic and cultural conditions of England, resulting in industrialised agriculture, manufacture, engineering and mining, as well as new and pioneering road, rail and water networks to facilitate their expansion and development. The opening of Northwest England's Bridgewater Canal in 1761 ushered in the canal age in Britain. In 1825 the world's first permanent steam locomotive-hauled passenger railway – the Stockton and Darlington Railway – opened to the public.

During the Industrial Revolution, many workers moved from England's countryside to new and expanding urban industrial areas to work in factories, for instance at Birmingham and Manchester, dubbed "Workshop of the World" and "Warehouse City" respectively. England maintained relative stability throughout The French Revolution; William Pitt the Younger was British Prime Minister for the reign of George III. During The Napoleonic Wars, Napoleon planned to invade from the south-east. However this failed to manifest and the Napoleonic forces were defeated by the British at sea by Lord Nelson and on land by the Duke of Wellington. The Napoleonic Wars fostered a concept of Britishness and a united national British people, shared with the Scots and Welsh.

London became the largest and most populous metropolitan area in the world during the Victoria era, and trade within the British Empire – as well as the standing of the British military and navy – was prestigious. Political agitation at home from radicals such as the Chartists and the suffragettes enabled legislative reform and universal suffrage. World War I started towards the end of The Edwardian Era; hundreds of thousands of English soldiers died fighting for the United Kingdom as part of the Allies. Two decades later, in World War II, the United Kingdom was again one of the Allies. At the end of the Phoney War, Winston Churchill became the wartime Prime Minister. Developments in warfare technology saw many cities damaged by air-raids during the Blitz. Following the war, the British Empire experienced rapid decolonisation, and there was a speeding up of technological innovations; automobiles became the primary means of transport and Frank Whittle's development of the jet engine led to wider air travel. Residential patterns were altered in England by private motoring, and by the creation of the National Health Service (NHS) in 1948. The UK's NHS provided publicly funded health care to all UK permanent residents free at the point of need, being paid for from general taxation. Combined, these changes prompted the reform of local government in England in the mid-20th century. 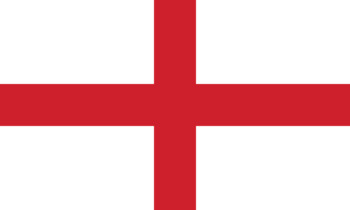 The red cross on a white field goes back to The Crusades, when English and French crusaders exchanged colours assigned to them by The Pope with each other (originally England got a standard of a white cross on a red field), which was identified with Saint George, a late 3rd-century Roman soldier.
The English national song
And did those feet in ancient time,
Walk upon Englands mountains green:
And was the holy Lamb of God,
On Englands pleasant pastures seen!
And did the Countenance Divine,
Shine forth upon our clouded hills?
And was Jerusalem builded here,
Among these dark Satanic Mills?
Bring me my Bow of burning gold:
Bring me my Arrows of desire:
Bring me my Spear: O clouds unfold:
Bring me my Chariot of fire!
I will not cease from Mental Fight,
Nor shall my Sword sleep in my hand:
Till we have built Jerusalem,
In Englands green & pleasant Land.
Government