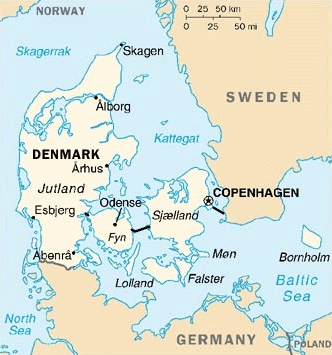 Der er et yndigt land...
"[The Iranian government] decided to boycott all Danish products. Now - I'm not sure they were making a roaring trade in pornography, beer and bacon before."
— Jimmy Carr, The Most Offensive Joke In The World

A democratic constitutional monarchy, it is a member of NATO and The European Union, but retains its own currencynote Although a separate currency, the krone is pegged to the Euro. In 1969 it became the first country in the world to legalise hardcore pornography, which contributed to attracting a certain kind of tourist.

Denmark has one of the oldest known national flags, the Dannebrog, which dates back to the 14th century at least. The flag is flown (and miniature paper flags used for decoration) at festive occasions such as birthdays and Christmas. Danes tend to perceive their flag as an icon of joy and celebration first, and only secondarily as a symbol for their country. They may have trouble grasping why displaying a flag in celebration could be interpreted as a nationalist gesture. The Danish anthem, "Der er et yndigt land", or "There is a lovely country", is one of the very few to include references to ancient (Viking) religions. Its poetry is also quite beautiful.

The Danes (as the Vikings were usually known at the time) struck terror into much of Northern Europe from the 9th to the 11th centuries, but since then, Denmark has generally been content to trade peacefully, barring the odd scuffle with their neighbor and nemesis, Swedennote there have been 11 Dano-Swedish wars between 1521 and 1814. For a while during the 15th century, the Union of Kalmar united Denmark, Norway and Sweden under one king, but it couldn't last. Sweden left and Norway decided to join Denmark properly. Due to Denmark choosing to join the French side in the Napoleonic Wars, and thereby ending up on the losing side, Norway was ceded to Sweden.

The modern Danish state was born in 1848, as a part of the liberal revolutions that swept through Europe at the time. Hoping to avoid the violent revolutions that had rocked much of Europa, the recently-crowned Frederick VII met with representatives from the Danish national-liberal movement and agreed to peaceful ended the absolute monarchy, reforming the Danish state into a constitutional monarchy with a democratically elected parlament, and constitutionally guaranteed rights to freedom of speech, freedom of the press, and freedom of association. Unfortunately for Denmark, the advent of nationalism was also a consequence of the 1848 revolutions, and this was especially felt in the duchies of Schleswig and Holstein in the southernmost parts of Denmark, which were due to various Binding Ancient Treaties not formally a part of Denmark proper, but rather a part of the realm of the Danish Crown. Schleswig especially was split by a predominantly culturally Danish population in the Northern Schleswig/Southern Jutland which desired to be a full and equal part of Denmark, and a predominantly culturally German population in Southern Schleswig who began agitating to leave Denmark, and some arguing for the formation of a free republic with their fellow Germans in Holstein. Like most countries do when faced with secessionism, Denmark cracked down, which provoked the German Republicans to rise in rebellion. What Denmark didn't count on, however, was other German states, most prominently the military powerhouse of Prussia, interfering on the rebels' side, which sparked the First Schleswig War. Denmark eventually managed to hold on and keep all of its territory thanks to international mediation which ended the war in 1851.

However the national disagreements that had sparked the conflict in the first place had not been resolved by the peace settlement, only temporarily tabled. And in 1863 the conflict was reignited, when Denmark once again made movements to alter the status of the duchies through an amendment of the Danish constitution, despite this being a willful breach of international treaties drafted after the war. Many considered it a stupid move in hindsight, but to the Danish government it did look like a good idea of the time, as the Minister President of Prussia Otto von Bismarck had implied that his country would not interfere this time. But this was a carefully planned deception on Bismarck's behalf — done by deliberately using highly ambiguous language. Bismarck, in fact, wanted a war for internal political reasons. In early 1864, Bismack's trap sprung shut, when Prussia and its ally, Austria, declared the Second Schleswig War. Alone and facing an enemy who was superior in both manpower and technology, Denmark would suffer a couple of humilating and traumatic defeats in the spring of 1864, and was ultimately forced to cede Schleswig and Holstein to Prussia and Austria (who then almost immediately afterwards proceed to fight a war over the spoils).

Denmark was occupied by the Nazis in 1940 and got virtually its entire Jewish population out before the Nazis could get their hands on them. It was not liberated before the German surrender in 1945.

Denmark is made up of a peninsula (Jutland, or Jylland to the Danes), and a whole bunch of islands. The biggest island is Zealand (Sjælland), on which stands Copenhagen (København). The country is notable for its flatness; average elevation stands at 34 m, just piggybacking the Netherlands (which goes with the absolutely abysmal 30 m), while the highest point in the country itself is a television tower called the Rø Transmitter

◊, which stands on a hill giving it a 431.3 m height, while the highest natural point is a hill called Møllehøj

◊ (170.86 m), with a millstone marking it for good measure. The "mountainous Scandinavia" that most people associate when they think about the region actually characterizes Norway and the Lapland parts of Sweden and Finland better. So, if you ever see any film depicting Denmark with mountains, waterfalls, boreal forests, and the like, suffice to say you've been lied to.

Like the United Kingdom, Denmark has the concept of constituent countries, which make up the much-larger "Kingdom of Denmark". Other than the continental part, the Kingdom includes the Faroe Islands and Greenland, both of which have received home rule and thus function as independent countries except in the matters of foreign affairs. It also formerly included Iceland until 1918 when it became a separate Kingdom with a shared royal house with Denmark (not unlike the Commonwealth), followed by a British/American invasion in 1940 to prevent it falling into German hands, and the creation of the current day Republic of Iceland.

Denmark is famous as the home of LEGO, and the LEGOLAND theme park in Billund, central Jutland (also home to The LEGO Group's headquarters) is one of the country's major tourist attractions; in parodies, it's common to jokingly depict LEGO as Denmark's currency. Denmark is also a major producer of dairy goods and pork and bacon - "Danish Bacon" is one of the premium brands in Britain. Several varieties of cheese have their origins in Denmark, of which Havarti is probably the best-known. Another one of its main tourist attractions is the annual Roskilde Festival, which has been held since 1971.

The second most recent notable event to take place in Denmark is the massive controversy over some cartoons. Danish-born British comedienne Sandi Toksvig commented that she never thought she would see anyone burning Danish flags, such was the cozy, inoffensive reputation of the country (and why would you burn an icon of joy and celebration anyway? - disregarding that it is accepted that the only way to get rid of an old flag without dishonoring it, is to burn it). The first most recent notable event was the recent climate change conference.

The current monarch of Denmark is Queen Margrethe II, and the current prime minister is Mette Frederiksen. Margrethe II is a descendant of King Christian IX who is known as the "father-in-law of Europe" because, similar to Queen Victoria, many of his children married into other royal families across Europe. His oldest son and successor Frederick VIII married Princess Louise of Sweden. The other children are: Alexandra, Queen consort of the United Kingdom; George I of Greecenote Who was voted to replace the deposed and exiled king Otto I. Hence why the Greek princes and princesses descended from him would be known as "Prince/Princess [insert name here] of Greece and Denmark", with the exception of crown princes and crown princesses whose title would simply be "Crown Prince/Princess of Greece".; Maria Feodorovna, Empress consort of Russia; Thyra, Crown Princess of Hanover; while his youngest child Prince Valdemar married French Princess Marie of Orleans. Among the descendants of Christian IX in the present day, other than Margrethe II, are Elizabeth II of the United Kingdom, Philippe of Belgium, Harald V of Norway, Felipe VI of Spain, Grand Duke Henri of Luxembourg, Constantine II of Greece, Queen Anne-Marie of Greece, Queen Sofia of Spain, and Prince Philip, Duke of Edinburgh.

For the Danish Defence, see Danes With Drakens.

Politics of Denmark If you are a Libertarian, this is not the place for you. Denmark has some of the highest tax rates in the world. The population is largely content with this as it supports a large welfare state, public health care and education for every citizen. But Denmark also has some of the strictest immigration laws in Europe, which have gotten progressively stricter in recent years and which effectively limit the state's largesse. If you are a non-European, please notice that in Denmark, like most of Europe, the word "liberal" generally means being center/right-oriented, as opposed to being left-oriented as it is in the US.

There are other parties with no parliamentary representation, but on the ballot for the general election. In addition, there are 4 parties from Greenland and the Faroes each with 1 seat represented in Parliament. 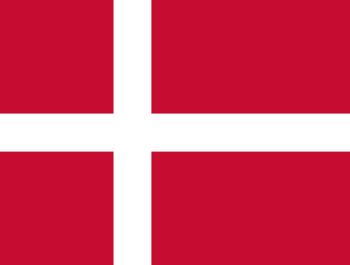 Popularly known as the Dannebrog, the Danish flag is reputedly one of the oldest national flags in the world still in use. While its historical origins are unclear (the only thing most accounts agree on is that it was a papal banner), popular tradition attributes it to a turning point of the Battle of Lyndanisse

of 1219 for the conquest and conversion to Christianity of the same-named town (modern-day Tallinn, Estonia) — initially fighting a losing battle against pagan Estonians, the Danes prayed desperately until the flag came down from heaven, which they interpreted as a sign of divine favor and inspired them to victory.
Coat of arms of Denmark 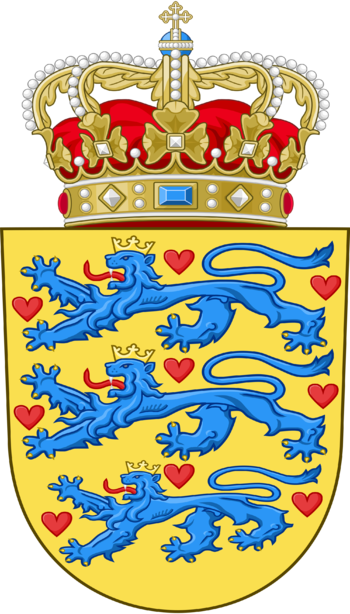