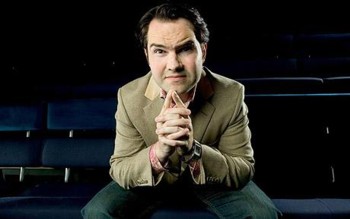 "I suppose I'd better warn you that in my act there is a certain amount of bad language. I'm not talking about split infinitives. There will be some swearing and there is some material of a sexual nature. So, if you are offended by rude or crude material, for heaven's sake, don't be a cunt about it."
— Opening lines of Jimmy Carr: Live
Advertisement:

Almost nothing is off-limits, as he's tackled such light-hearted topics as rape, pedophilia, 9/11, abortion, and the Holocaust, often done in a posh, Sophisticated as Hell manner.

He has been presenter of a number of TV series, including 8 Out of 10 Cats (and its crossover spin-off 8 Out of 10 Cats Does Countdown), Big Fat Quiz of the Year, 10 O'Clock Live, and Distraction, as well as a frequent guest on QI. He also presented the 2003 Channel 4 show The 100 Greatest Scary Moments.

Seriously, heckle him at your own risk.

His stand-up specials are: